12 December 2014
Addressing the Congress of Peru today, United Nations Secretary-General Ban Ki-moon said that despite impressive development achievements, big challenges remain – to address inequality and insecurity, deepen democracy, improve the quality of education, and protect the rights of all people regardless of gender, ethnicity, culture, religion or sexual orientation.

“This week, Lima became the centre of global efforts toward an ambitious new climate change agreement and setting the world on a safer, more sustainable path,” he said.

Mr. Ban is in Peru’s capital Lima for the UN Climate Change Conference (UNFCCC), known also as Conference of the Parties (COP 20), which concludes its 12-day meeting today. COP 20 brought together the 196 Parties to the UNFCCC, the parent treaty of the landmark 1997 Kyoto Protocol, in an attempt to hammer out the new universal treaty, which would enter force by 2020.

“I cannot overstate the importance of the foundation that is being laid at the UN Climate Conference in Lima,” Mr. Ban said, emphasizing the need to adopt a post-2015 agenda with a new generation of development goals, and approve a meaningful, universal climate agreement.

Also today, Mr. Ban met with President Ollanta Moisés Humala Tasso of Peru at the launch of a National Plan on human rights education. Mr. Ban commended Peru’s landmark law on Consultation with Indigenous Peoples, the first in Latin America. Through this law, Peru has recognized that dialogue is fundamental to social cohesion and sustainable development.

“Let us work to ensure that indigenous communities have the chance to fully develop. Let us also learn from the many ways they have lived in harmony with Mother Earth – protecting forests, safeguarding water supply, preserving biodiversity,” he said.

By strengthening its legal framework for the protection of indigenous peoples with regard to the exploitation of natural resources, Peru can show the world how respecting the environment and upholding rights is central to sound economic growth.

Yesterday Mr. Ban met with several Presidencies of the Conference of Parties (COP) including the Minister of the Environment of Peru and COP 20 President, Minister of Foreign Affairs of France and President Designate of COP 21; the Minister of Ecology, Sustainable Development and Energy of France.

At this meeting, the Secretary-General stressed the three outcomes he deems essential from the UN Climate Change Conference in Lima: a draft text of the 2015 Agreement, clarity on the scope of Intended Nationally Determined Contributions (INDCs), and a clearly defined negotiating process that will begin as soon as possible in early 2015. 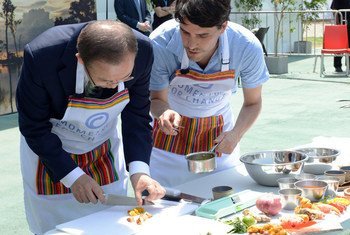 11 December 2014
The more action that is taken today on climate change, the more likely countries will push for stronger agreements tomorrow, United Nations Secretary-General Ban Ki-moon told a high-level meeting today at the UN Climate Change Conference, known also as the 20th session of the Conference of the Parties (COP 20).