“The more we delay, the more we will pay,” warned Mr. Ban as he called on countries to deliver by closing tomorrow a draft text for the 2015 Agreement that provides a clear and solid foundation for negotiations to be held next year in France.

“Actions now will set a strong foundation for Paris, and go hand-in-hand with our efforts to realize sustainable development,” the UN chief added.

COP 20, which opened on 1 December in Lima, Peru, brings together the 196 Parties to the UNFCCC, the parent treaty of the landmark 1997 Kyoto Protocol, in an attempt to hammer out the new universal treaty, which would enter force by 2020. The Conference wraps up tomorrow.

“We have been talking over the last two decades. Now it is time to begin real, serious negotiations based on a draft text,” the Secretary-General said.

“A non-paper is not an option. I urge all delegations to overcome all procedural matters and deliver a text with a formal status, so that the work of negotiating can begin in earnest at the February session. We don’t have a moment to lose,” he stressed.

Momentum could be based on the success of last September’s Climate Summit in New York, where leaders announced ambitious commitments and new coalitions came together to advance sustainable agriculture and energy efficiency, Mr. Ban said.

During that conference, CEOs also committed to sustainable supply chains that will help preserve the world’s forests and industry leaders in oil and gas, freight, and municipal waste all came forward with commitments as well.

The UN Chief also commended the “milestone” achieved this week when the Green Climate Fund reached its $10 billion monetary goal. But, he added, that amount remained “only a down payment” and the world needed to now ensure ready access to those funds for countries that are most vulnerable to climate change. 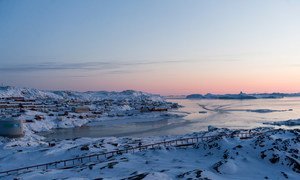