UNESCO/F. Bandarin
UNESCO and the European Union have undertaken to reconstruct the cultural heritage of Timbuktu.
24 November 2014

A United Nations committee tasked with protecting the world’s oral traditions, performing arts, social practices, craftsmanship and knowledge of nature will begin examining requests today for inscription on the two lists of intangible cultural heritage, as part of its current session meeting in Paris this week.

A press release issued today by the UN Educational, Scientific and Cultural Organization (UNESCO) details the programme of work for the ninth session of the Intergovernmental Committee for the Safeguarding of the Intangible Cultural Heritage, which opened today at UNESCO’s headquarters in Paris with more than 950 participants, and will continue through Friday.

“The vitality of this Convention and the interest it meets prove that many countries now recognize intangible heritage as a tool that can ensure sustainable development and that they integrate ever more fully its safeguarding in their development and planning programmes,” said UNESCO Director-General Irina Bokova in a news release leading up to the session’s launch.

The 24-member Committee, which is chaired by José Manuel Rodríguez Cuadros of Peru, is in charge of implementing the 2003 Convention for the Safeguarding of the Intangible Cultural Heritage, which to date numbers 161 States Parties.

“The Convention for the Safeguarding of the Intangible Cultural Heritage is ambitious, generous and, in many respects, ground-breaking,” said Alfredo Pérez de Armiñán, Assistant Director-General of UNESCO for Culture.

“It recognizes communities as the main players in identifying and safeguarding intangible cultural heritage and calls on all States Parties to practice true cultural democracy, which is very promising for the future of all societies; for their cohesion and sustainability,” he added.

The nominations for inscription on the UNESCO List in Need of Urgent Safeguarding, which is composed of intangible heritage elements whose vitality is at risk and whose safeguarding is regarded as a matter of urgency, represent Cambodia, Croatia, Ethiopia, Honduras, Kenya, Pakistan, Uganda and Venezuela. The list numbers 35 elements to date.

In addition, there are 46 nominations to the Representative List, which aims to enhance the visibility of communities’ traditions and knowledge without recognizing standards of excellence or exclusivity. That list has 281 elements to date.

Among other activities, the Committee will also examine 27 periodic reports on the implementation of the Convention and 8 reports on an element inscribed on the Urgent Safeguarding List.

For his part, Chairperson Rodríguez Cuadros welcomed “the great number of participants, unprecedented since the adoption of the Convention, which shows the importance given to our Convention, both nationally and internationally.” 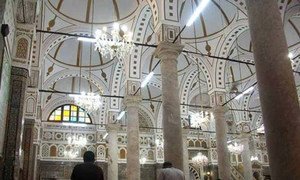 The head of the United Nations Educational, Scientific and Cultural Organization (UNESCO) today called on all parties in Libya to safeguard the country’s cultural and religious heritage amid a recent intensification of violence there.