UNHCR/P. Rubio Larrauri
Two displaced girls stand in front of the classroom where their family has been living in Aden, Yemen (September 2012).
18 November 2014

Voicing great concern over serious human rights abuses that have occurred in Yemen in recent months, the United Nations human rights office today issued a strong call on parties of all sides to renounce violence and ensure immediate access to humanitarian assistance in conflict zones.

“The UN Human Rights Office in Yemen has documented serious violations committed by all sides,” Rupert Colville, spokesperson for the Office of the High Commissioner for Human Rights (OHCHR) told reporters in Geneva today, explaining that such violations include the killing of civilians, arbitrary detentions, the recruitment of children and the targeting of schools and hospitals as well as private property.

Of particular concern, Mr. Colville said, is the situation of children, especially those that have been seen manning checkpoints, on board armed vehicles, patrolling streets and present in schools that have been used for military purposes.

OHCHR continues to document civilian deaths and injuries in the country. However, he said, some families have been afraid of speaking out for fear of reprisals.

Given that no official investigations have been conducted, “OHCHR urges the authorities to ensure that violations of international human rights law are promptly investigated by independent and impartial bodies in order to ensure that victims’ right to justice and remedy is upheld,” said Mr. Colville.

Urging that all parties involved in the recent violence in the south to allow immediate access to humanitarian assistance in conflict-affected areas, including in Al-Shabwa and Al-Baida Governorates, he said the agency is closely monitoring the situation in the region and call on all parties to exercise utmost restraint and to resolve their differences peacefully.

Despite the formation of a recent new Government as a result of national efforts, “OHCHR calls on all sides of the political divide in Yemen to renounce the use of violence and to participate in the ongoing national processes,” said Mr. Colville, adding that those include “the drafting of the new Constitution and the implementation of the outcomes of the national dialogue to avoid a descent into further instability and bloodshed.”

According to Mr. Colville, the OHCHR and other UN actors in Yemen continue to be closely involved in the constitution-building and reform processes in the country.

On 7 November 2014, a formation of a new Peace and National Partnership Government in Yemen was announced, aiming at ending a period of political turbulence and bringing about a full transition towards democracy in the country.

In 2011, the OHCHR recommended the Government to establish a national commission of inquiry to look into violations. Unfortunately, that recommendation had never been acted upon. 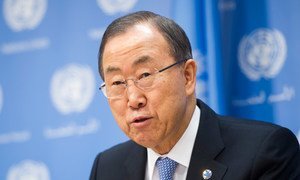 United Nations Secretary-General Ban Ki-moon today welcomed the formation of a new Peace and National Partnership Government in Yemen aimed at ending a period of political turbulence and bringing about a full transition towards democracy in the country.