The number of asylum-seekers in Europe from Eritrea during the first 10 months of 2014 has tripled compared with last year, with large numbers of refugees from the country also fleeing to neighbouring Ethiopia and Sudan, the United Nations Refugee Agency (UNHCR) said today.

Thus far in 2014, nearly 37,000 Eritreans have sought refuge in Europe, compared with almost 13,000 during the same period last year, UNHCR said in a press release today.

Most of the Eritreans arriving in Europe have initially travelled via Ethiopia and Sudan, Mr. Edwards said. Those countries have also experienced a dramatic increase in arrivals, including large numbers of unaccompanied children.

“Most asylum requests have been lodged in Sweden, Germany and Switzerland, with the vast majority of the Eritreans having arrived by boat across the Mediterranean,” a UNHCR spokesperson, Adrian Edwards, said in a press briefing in Geneva earlier today.

According to UNHCR's office in Italy, 22 per cent of the people arriving by boat are Eritrean, a total of nearly 34,000 people this year. That makes Eritreans the second-largest group – after Syrians – to arrive in Italy by boat, the spokesperson noted.

Furthermore, more than 5,000 Eritreans crossed into Ethiopia during the month of October alone, compared with the average of some 2,000 arrivals per month since the beginning of the year, Mr. Edwards said.

About 90 per cent of those who arrived in Ethiopia in October were between 18 and 24 years old, and some 78 children arrived on their own, without an adult family member. More than 1,200 Eritreans arrived in Ethiopia during the first week of November, the spokesperson added.

In Sudan, UNHCR has also been witnessing a marked increase in the number of arrivals since the beginning of 2014, Mr. Edwards said. He noted that more than 10,700 Eritreans have sought refuge in Sudan this year, an average of more than 1,000 arrivals per month.

Recent arrivals have told UNHCR staff that they are fleeing an intensified recruitment drive into the mandatory and often open-ended national service.

In addition, growing numbers of the predominantly young refugees in Ethiopia and Sudan have become frustrated with the shortage of services and absence of self-reliance opportunities in the camps, Mr. Edwards said.

“We are extremely concerned that the refugees crossing into Ethiopia will eventually try to move on,” he said. “There is a need to boost education and livelihood opportunities for the refugees in the countries neighbouring Eritrea to prevent people moving on simply out of desperation.”

At the same time, UNHCR is also calling on Europe to step up efforts to provide credible legal alternatives to dangerous voyages, to protect people from the risks of traveling with smugglers.

The collective response needs to maintain a strong capacity to rescue people at sea and increase safer ways for refugees to find safety, including enhanced resettlement, other forms of humanitarian admission and private sponsorship schemes, the spokesperson stressed.

In addition, UNHCR is calling on European governments to do more to facilitate family reunification and use programmes such as student or employment visas to benefit refugees, Mr. Edwards concluded.

UN Mission signs agreement with Eritrea on militia and police

Ahead of rains, UN refugee agency steps up return of Eritreans from Sudan 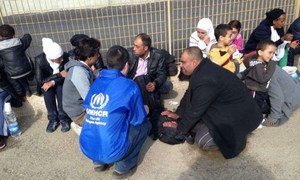 The United Nations refugee agency reported today that new data on irregular crossings of the Mediterranean in the third quarter of 2013 show an alarming increase in the numbers of people perishing while attempting to make the journey to Europe.