UNFPA The Gambia
A marching band in Farafenni, a market town in The Gambia, just south of the border with Senegal.
7 November 2014

Two United Nations human rights experts were forced to suspend an integral part of their visit to The Gambia this week when they were denied access to parts of a prison and prevented from completing a torture and killing investigation during the first trip ever to the country by such an independent fact-finding team, according to a press release from the UN rights office.

Upon arriving in the West African country under the mandate of the Human Rights Council, Special Rapporteurs Christof Heyns and Juan Méndez were offered a guided tour to parts of the prison, according to a joint statement from the UN Office of the High Commissioner for Human Rights (OHCHR).

The independent experts – part of the “Special Procedures” of the UN human rights system – were then informed that “under no circumstances would they be allowed to visit the Security Wing, where [among others] the death row prisoners are held.”

“Due to denial of access to the Security Wing of Mile 2 prison to visit those sentenced to lengthy sentences, including the death penalty, an inference must be drawn that there is something important to hide. This incident forced us to suspend this integral part of the visit,” the Special Rapporteur on extrajudicial, summary or arbitrary executions, Christof Heyns, said.

Unrestricted access in one country but not in others would “clearly display double standards and undermine the mandates entrusted to us”, the Special Rapporteur on torture and other cruel, inhuman or degrading treatment or punishment, Juan Méndez, said.

In was the Gambian Government that earlier this year, in what seemed like a “remarkable” move, invited the two UN experts for a joint visit from 3 to 7 November. The experts are still expected to present reports on their visit to the Human Rights Council in March and June 2015.

Mr. Heyns and Mr. Méndez arrived in the country planning to examine the current level of protection of the right to life in law and in practice, assess the situation regarding torture and other cruel treatment or punishment.

Unfortunately, and despite a written agreement accepting the Terms of Reference of the two mandates, once the investigators arrived, the Government denied them access to certain sections of the first prison the two mandate holders attempted to visit.

Having suspended visits to all places of detention, the two experts were unable to assess independently the conditions in any of the prisons or police stations, though they were still able to meet with people who have been detained or served their sentences in those prisons.

“Throughout the visit, we received many testimonies from people who did not want to be identified out of fear for either their own safety or their families, and we have therefore asked the Government to reaffirm its commitment not to engage in any reprisals,” the experts said.

In August 2012, The Gambia reintroduced executions for a couple of days, during which time it executed nine death row prisoners. According to evidence, the death sentences were imposed in violation of international fair trial standards.

Prior to that, the last official execution in the country took place in 1985 and the country actively participated in the region’s efforts to abolish the death penalty, with a moratorium on the practice for 27 years and the abolition of capital punishment for drug offences in April 2011.

During their visit, Mr. Méndez and Mr. Heyns heard reports of extrajudicial executions and enforced disappearances against those who are deemed to be opponents of the regime, members of security forces, journalists and human rights defenders.

They received many reports that there are para-military hit-squads in the country that go by names such as the ‘Jungulars.’

“During my investigation I found that torture is a consistent practice carried out by the National Intelligence Agency. In cases where there is a real or perceived threat to national security, there is a corresponding increase in acts of torture and ill-treatment during the detention and arrest process” Mr. Méndez noted.

The Special Rapporteurs called on the Government to appoint a judicial Commission of inquiry to investigate these allegations. Furthermore, judges and prosecutors, under a sense of legal obligation, should visit places of detention to locate detainees subject to a petition for habeas corpus relief or for bail.

They also had a responsibility to order medical examinations as soon as any suspicion of mistreatment arises and initiate prosecutions against those responsible for mistreating an inmate.

“The ‘reasonable suspicion’ standard is seldom if ever examined to determine whether reasonable grounds existed, and the evidence obtained pursuant to an otherwise illegal arrest is challenged even less frequently,” the experts said.

“As a result, police arrest to investigate, rather than investigate to arrest,” they added.

The United Nations human rights experts work on a voluntary basis. They are not UN staff, do not receive a salary for their work and are independent from any government or organization. 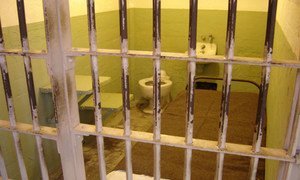 The Gambia postponed a visit at the last minute by two United Nations independent experts, a move they find “extremely worrying” and which casts doubt on the West African country’s commitment to human rights.