WHO/TDR /Isaias Montilla
An old person posing in front of her house in Chagas, Mexico, where long-lasting impregnated curtains were installed in order to keep the house free of the triamatone bugs.
6 November 2014

The United Nations health agency warned today that as the world population aged 60 or older will jump from some 800 million to 2 billion in the next four decades, soaring levels of chronic illness and diminished wellbeing are poised to become a major global public health challenge.

“By 2020, for the first time in history, the number of people aged 60 years and older will outnumber children younger than 5 years,” the UN World Health Organization (WHO) said reporting its findings in a series on health and ageing in the medical journal The Lancet.

And “by 2050, the world’s population aged 60 years and older is expected to total 2 billion, up from 841 million today,” WHO said, noting that 80 percent of these older persons will be living in low-income and middle-income countries.

WHO attributed the increase in longevity, especially in high-income countries, largely to the decline in deaths from cardiovascular disease (stroke and ischaemic heart disease), mainly because of simple, cost-effective strategies to reduce tobacco use and high blood pressure, and improved coverage and effectiveness of health interventions.

However, it said, “although people are living longer, they are not necessarily healthier than before.”

“Unless health systems find effective strategies to address the problems faced by an ageing world population, the growing burden of chronic disease will greatly affect the quality of life of older people,” WHO said.

“As people across the world live longer, soaring levels of chronic illness and diminished wellbeing are poised to become a major global public health challenge,” the health agency warned.

“Deep and fundamental reforms of health and social care systems will be required,” said Dr. John Beard, Director of the Department of Ageing and Life Course at the WHO, and co-leader of the Series with Dr. Ties Boerma and Dr. Somnath Chatterji, also from WHO.

The long-term burden of illness and diminished wellbeing affects patients, their families, health systems, and economies, and is forecast to accelerate.

“For example, latest estimates indicate that the number of people with dementia is expected to rise from 44 million now, to 135 million by 2050,” according to WHO.

The responsibility for improving quality of life for the world’s older people goes far beyond the health sector, the doctors noted.

“Strategies are needed that better prevent and manage chronic conditions by extending affordable health care to all older adults and take into consideration the physical and social environment,” WHO said.

The health agency said examples include changing policies to encourage older adults to remain part of the workforce for longer, emphasising low-cost disease prevention and early detection rather than treatment, making better use of technology (and training health-care staff in the management of multiple chronic conditions.

“Collectively, we need to look beyond the costs commonly associated with ageing to think about the benefits that an older, healthier, happier, and more productive older population can bring to society as a whole,” said Dr. Chatterji from WHO’s Department of Health Statistics and Information Systems.

♦ Receive daily updates directly in your inbox - Subscribe here to a topic.
♦ Download the UN News app for your iOS or Android devices.
older person 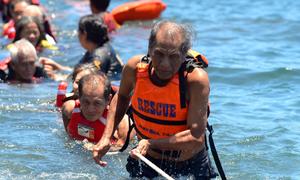 Marking International Day for Disaster Reduction, the United Nations is spotlighting the need to address the vulnerabilities facing older persons, who suffer disproportionately high levels of death and injuries in different types of emergencies and disasters, ranging from weather events and epidemics to armed conflict.