A rise in transnational organized crime, drug trafficking and piracy are threatening peace and stability across West Africa and the Sahel, Secretary-General Ban Ki-moon said today, calling for an increase in regional efforts to tackle this issue.

“Transnational organized crime, including drug trafficking, affects peace, security and stability wherever it occurs,” Mr. Ban told the Security Council this morning in New York and stressed that upheaval in Libya, as well as a growing food crisis and conflict in the region have raised fears that the situation could worsen.

According to the UN Office on Drugs and Crime (UNODC), cocaine trafficking in West and Central Africa generates some $900 million annually, and local consumption is also growing rapidly, with about 2.5 million drug users.

Mr. Ban said he was particularly concerned about reports stating that terrorist groups, such as Al-Qaida in the Islamic Maghreb, have formed alliances with drug traffickers and warned that inaction could be catastrophic for oil-producing countries that are frequently targeted for their petroleum assets, and for countries that rely extensively on their ports for national revenue.

“Such alliances have the potential to further destabilize the region and reverse hard-won democratic and peacebuilding achievements,” Mr. Ban said, adding that “the growing incidence of piracy in the Gulf of Guinea exacerbates the situation.”

Mr. Ban emphasized that the UN is working closely with authorities in countries that are main transit points for drug traffickers between South America and Europe such as Guinea-Bissau, Liberia and Sierra Leone to address this issue by creating transnational crime units that have been trained by UN Police (UNPOL).

However, he underlined the need for governments of the region to obtain the support of regional organizations and the international community to build and sustain the required capacity in information-sharing, prevention, investigation, law enforcement and border management.

“We have a responsibility to cooperate even more closely with Member States, as well as with regional and international organizations,” Mr. Ban said. “We must now be ready to do even more to keep the situation from escalating,” he added.

UNODC Executive Director Yury Fedotov echoed Mr. Ban’s remarks stressing that drug trafficking and piracy have evolved from social and criminal problems to stability and development threats. He emphasized that these activities are engendering other illegal activities such as trafficking of arms and human beings.

Mr. Fedotov underscored the importance of a multi-dimensional and strategic approach that works at the local, national and regional levels.

“Our overall goal is to support and strengthen local institutions, and encourage partnerships among States and regional organisations, such as the Economic Community of West African States (ECOWAS). All our activities are based on the principle of shared responsibility,” he said.

During today’s meeting, the Council adopted a presidential statement highlighting the importance of system-wide UN action to enable coordinated responses to transnational threats, as well as the need for support from regional and international initiatives.

In addition, the statement calls on States that have not yet done so to ratify relevant international conventions to combat drug trafficking, piracy and corruption.

♦ Receive daily updates directly in your inbox - Subscribe here to a topic.
♦ Download the UN News app for your iOS or Android devices.
organized crime

More must be done to take a bite out of organized crime in East Asia, Pacific – UN 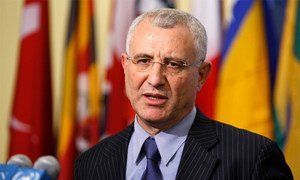 A senior United Nations official today called for closer ties between the UN and the Economic Community of West African States (ECOWAS) to deal with threats and challenges to the region after the 15-member body selected a new leadership team.