UNHCR/Helen Caux
Extreme violence in Adamawa, Borno and Yobe states in Nigeria has led some 250,000 civilians to flee their homes and find refuge in safer areas, staying mainly with host families.
17 October 2014

Amid an intensifying campaign of violence committed by insurgent groups in north-eastern Nigeria, the number of refugees fleeing the conflict into the West African country’s neighbouring States has steadily increased significantly, the UN refugee agency warned today.

Speaking at a press briefing in Geneva, William Spindler, a spokesperson for the Office of the UN High Commissioner for Refugees (UNHCR), told reporters that a spike in “rebellion and terror” in Nigeria’s north-eastern states of Adamawa, Borno and Yobe had produced a wave of refugees fleeing across the border into Cameroon, Niger and Chad over the past two months.

In early October, Mr. Spindler said, some 2,200 people fled the Nigerian village of Gueshkar following a “brutal” attack by insurgents who issued an ultimatum to the residents – “join their ranks or be killed.” The spokesperson added that the refugees, who quickly escaped into Nigerien town of Guesseré, reported that rebels set fire to Government buildings and ran Nigerian security forces out of town. It is the second such incident to affect Gueshkar this year.

The village of Bosso has also witnessed an influx of thousands of people fleeing the villages of Malam Fatouri, Metele, and Kangarwa in Borno State where insurgents sought to recruit up to 50 young men into their ranks.

As refugees pour into neighbouring villages, however, they are also placing a growing strain on infrastructure and “meagre resources,” Mr. Spindler continued, noting that Bosso’s absorption capacity was already “overstretched.” Meanwhile, the spokesperson pointed out that the Government of Niger had requested assistance from UNHCR in building temporary sites to accommodate the new arrivals but that shelter, water, and food were still lacking.

“UNHCR and its partners urgently need funding to assist the displaced from Nigeria and the local population hosting them,” he added.

The ongoing refugee crisis has seen more than 62,000 people spill over into Niger’s Diffa region since the beginning of 2014 while Cameroon is currently hosting some 44,000 Nigerian refugees. According to authorities, another 1,600 have fled to Chad.

Meanwhile, an estimated 650,000 people remain internally displaced in north-eastern Nigeria due to the insurgency. 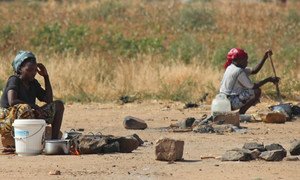 The United Nations refugee agency announced today that it is stepping up efforts to move some 5,000 Nigerian refugees in Cameroon away from a border town amidst ongoing cross border attacks by insurgents.