In war-ravaged Gaza, Ban urges ministers of new government to unite on “building one Palestine”

Two days after donors pledged $5.4 billion in aid for Gaza reconstruction, Secretary General Ban Ki-moon visited the war-ravaged enclave, where he viewed destruction wrought by the most recent conflict that was “beyond description”, and also met with the ministers of the National Consensus Government calling on them to focus all efforts on “building one Palestine.”

“We stand by you. The international community supports your government’s efforts to assume the security and governance responsibilities in Gaza,” the UN Chief said in remarks following his meeting with the top officials of the government including its Deputy Prime Minister Ziad Abu.

Mr. Ban said that while he was deeply moved by the destruction he had seen in Gaza, there are signs of hope. The Government of National Consensus has brought together Palestinian factions that have “too long” been divided. And the agreement between Israel, the United Nations and the Palestine government has facilitated the arrival today of the first truck bringing in cement and other construction material.

“This is a great opportunity to unite the West Bank and Gaza under one Palestinian leadership,” he added.

He also highlighted several important developments that “should facilitate your government performing its functions in Gaza” including the management by the Palestinian Authority of the Gaza crossings, in enabling the flow of materials and restoring trade between the West Bank and Gaza.

Mr. Ban’s Gaza visit comes on the heels of a weekend conference held in Cairo in support of the UN-backed plan on reconstruction of the enclave following a 51-day conflict in which entire neighbourhoods were flattened and almost one-third of Gaza's population was uprooted.

The violence killed more than 2,100 Palestinians, including more than 500 children, and more than 70 Israelis.

Mr. Ban talked with several people who have been deeply affected by the conflict. “I just met a man who lost his legs. He lost his brothers and sisters. It is very sad and heart-breaking,” said the UN chief.

He also talked about his visit today to the Jabalia school and meeting the children of Gaza, saying that being born in Gaza should not be a crime.

“My visit today to the school and to Gaza has reinforced my conviction that there is no time to lose. There can be no peace in the Middle East, no security for Israel, while the crisis in Gaza festers,” the UN chief said, declaring that the “build-destroy, build-destroy cycle must be broken”.

“The mindless pattern of blockade, rockets and destruction must stop. I repeat here in Gaza: the rockets fired by Hamas and other armed groups must end,” said Mr. Ban. 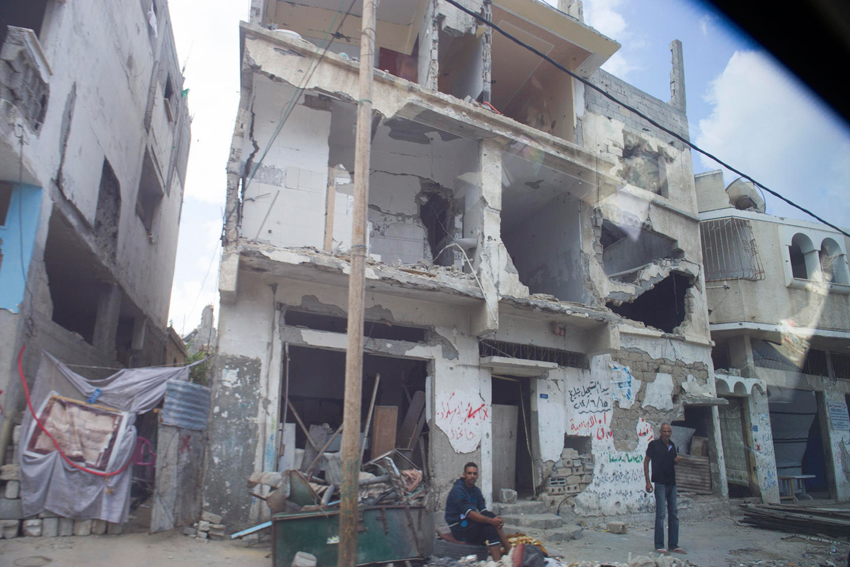 Scenes of the aftermath of the devastating Gaza conflict, which took place during the previous summer, 14 October 2014. UN Photo/Eskinder Debebe 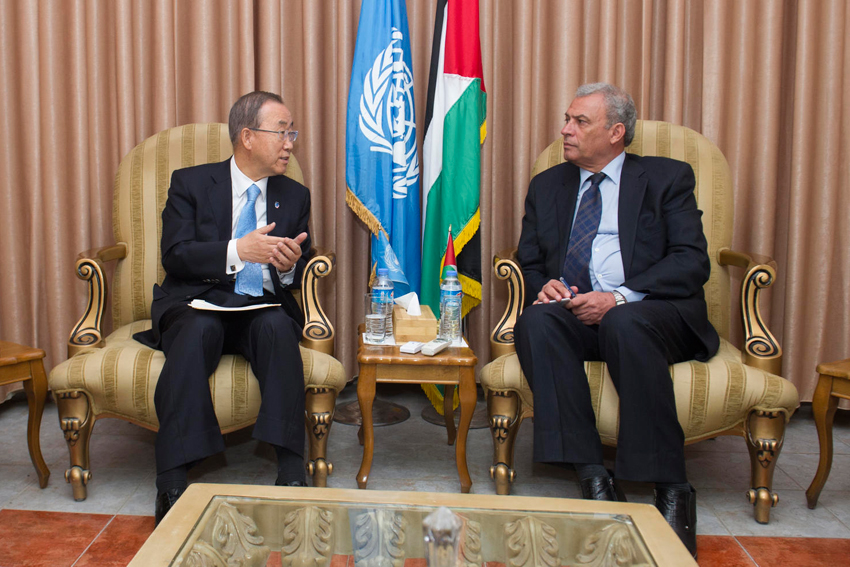 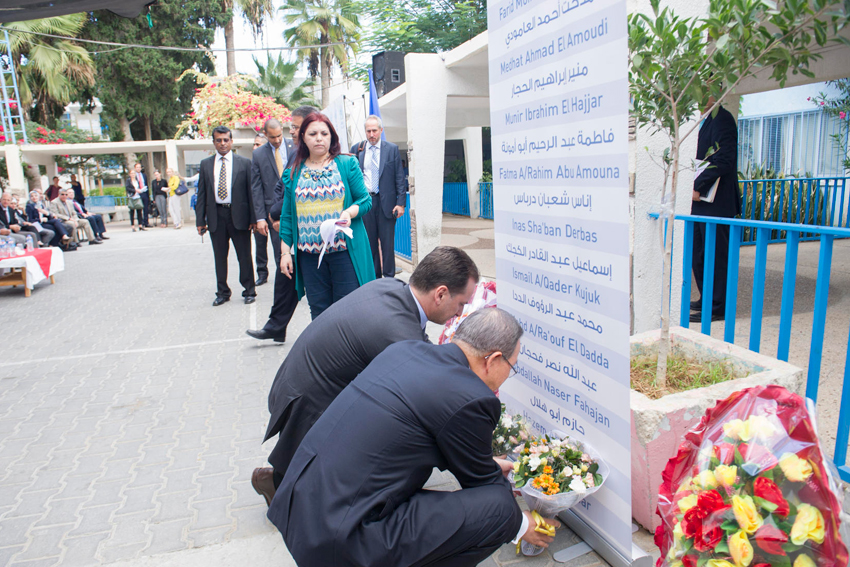 Secretary-General Ban Ki-moon pays his respects to the memory of the UNRWA staff members who lost their lives during the conflict in Gaza the summer. UN Photo/Eskinder Debebe 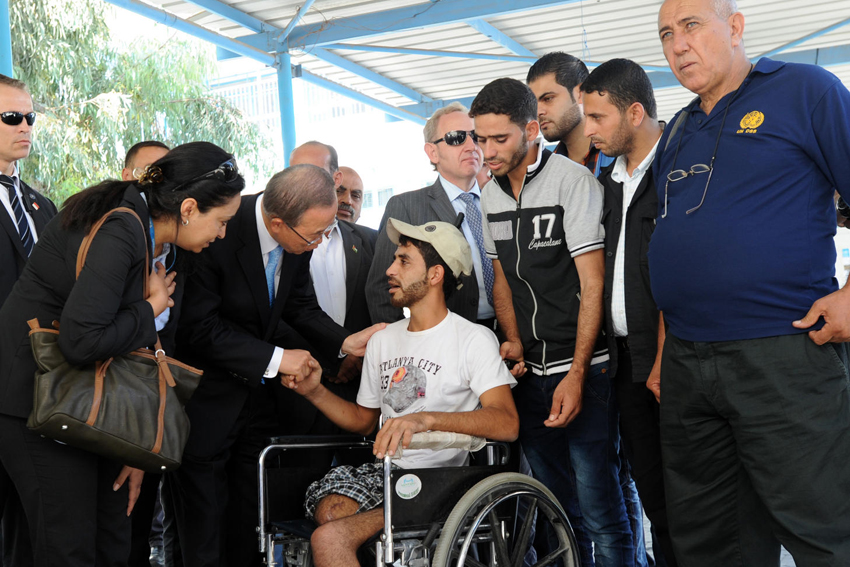 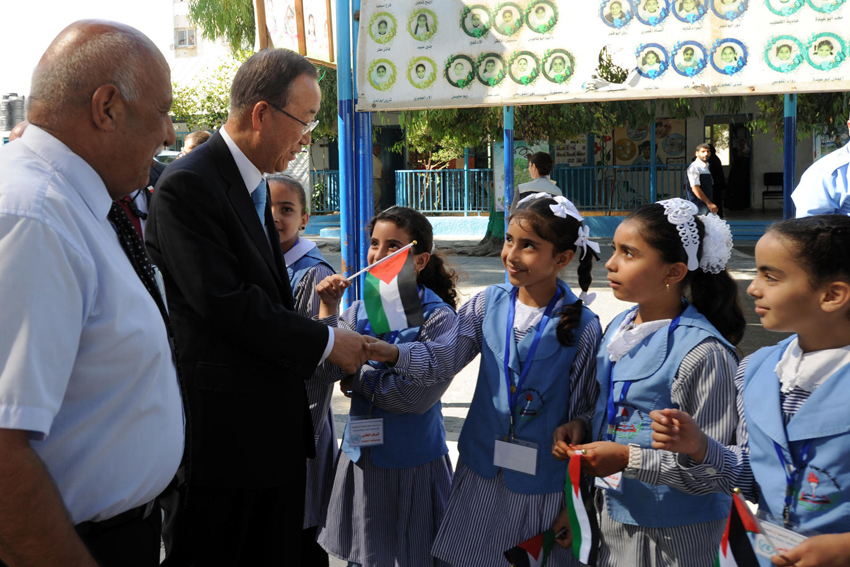 Secretary-General Ban Ki-moon visits the UN school at the Jabalia refugee camp. The school was damaged by Israeli shelling during the conflict in Gaza the summer. UN Photo/Eskinder Debebe 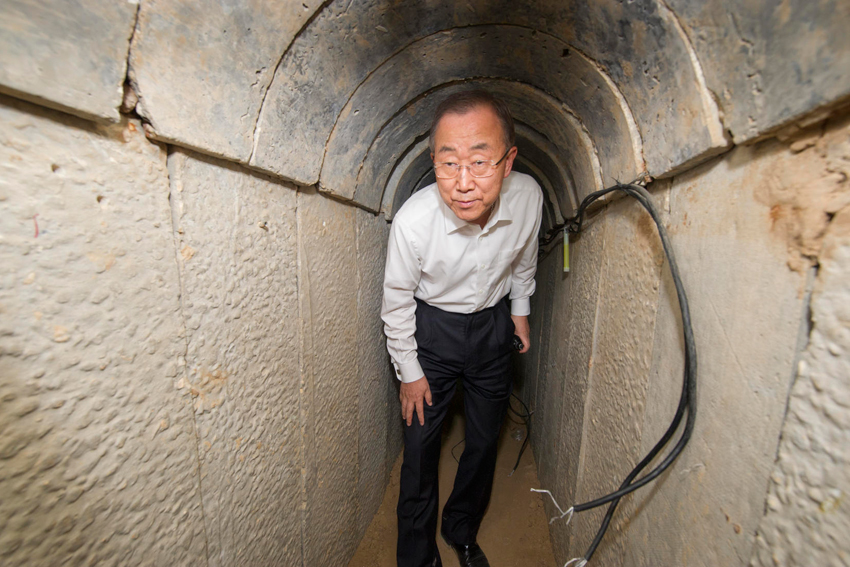 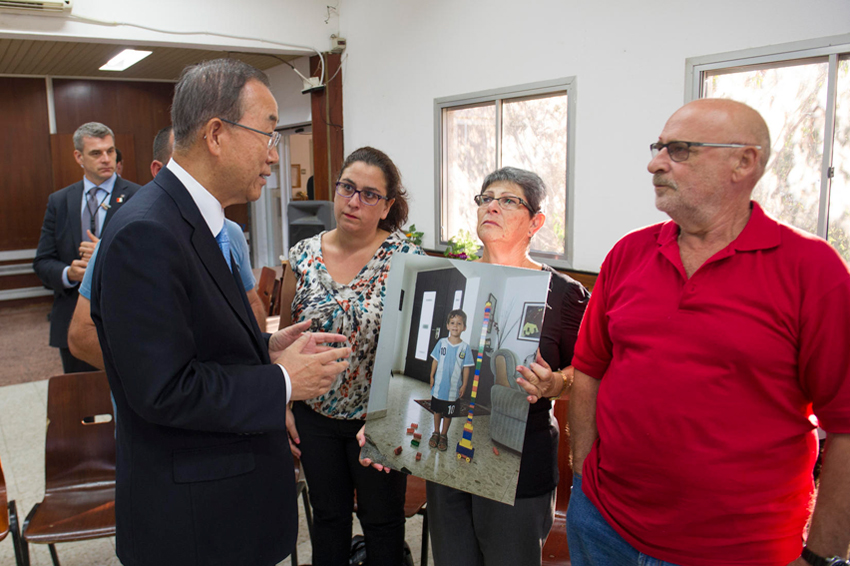 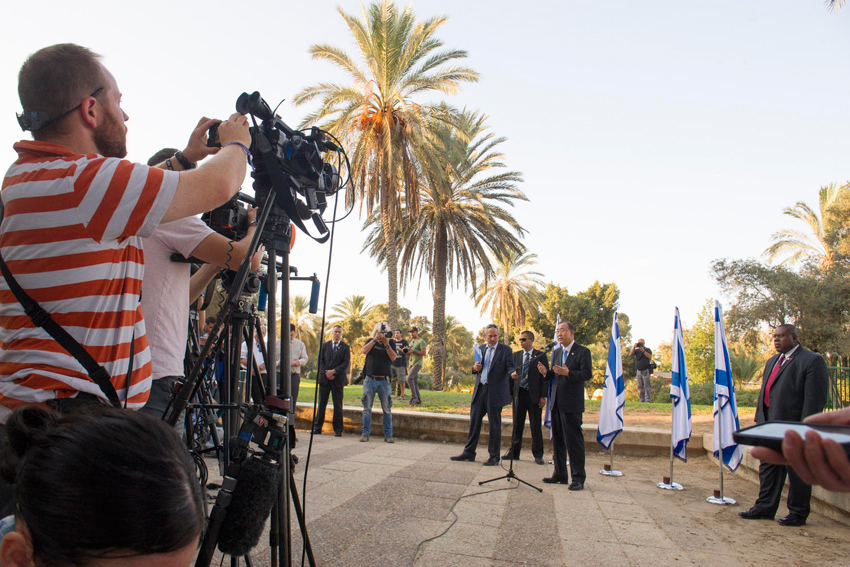 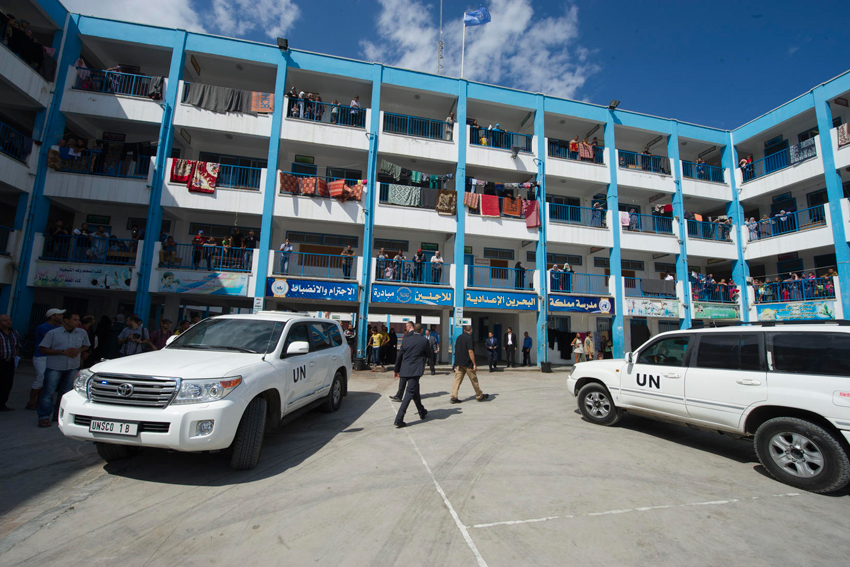 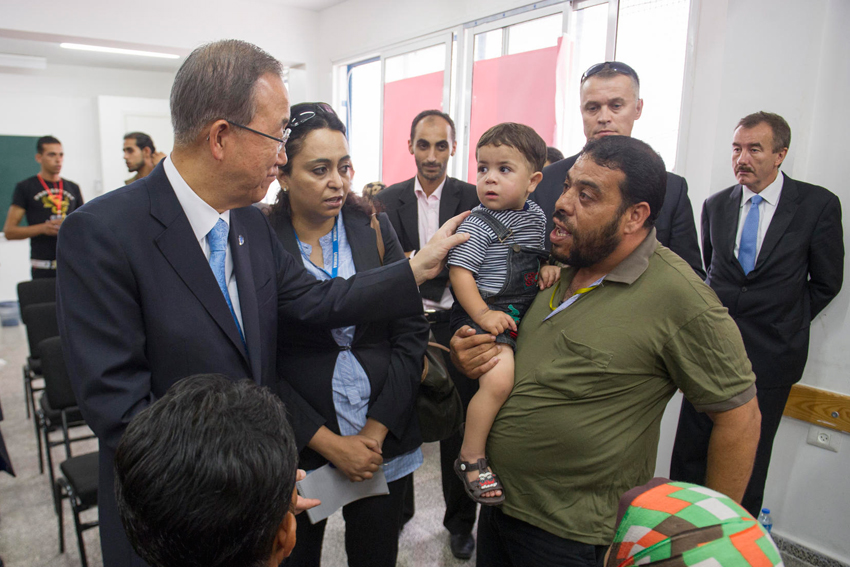 Secretary-General Ban Ki-moon meets with internally displaced persons at the UNRWA Collective Centre during his visit to the Gaza Strip. 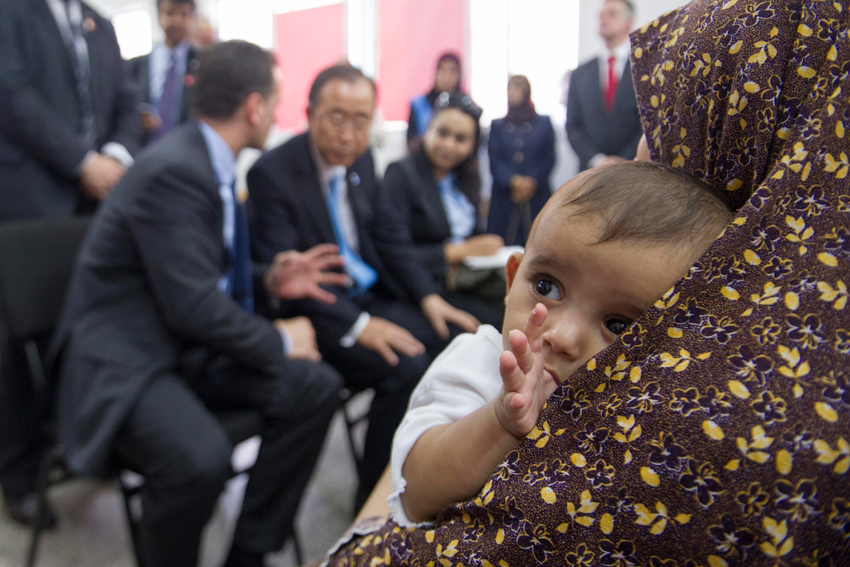 A child in Secretary-General Ban Ki-moon’s audience during his visit with internally displaced persons (IDPs) at the UNRWA Collective Centre in Gaza. UN Photo/Eskinder Debebe 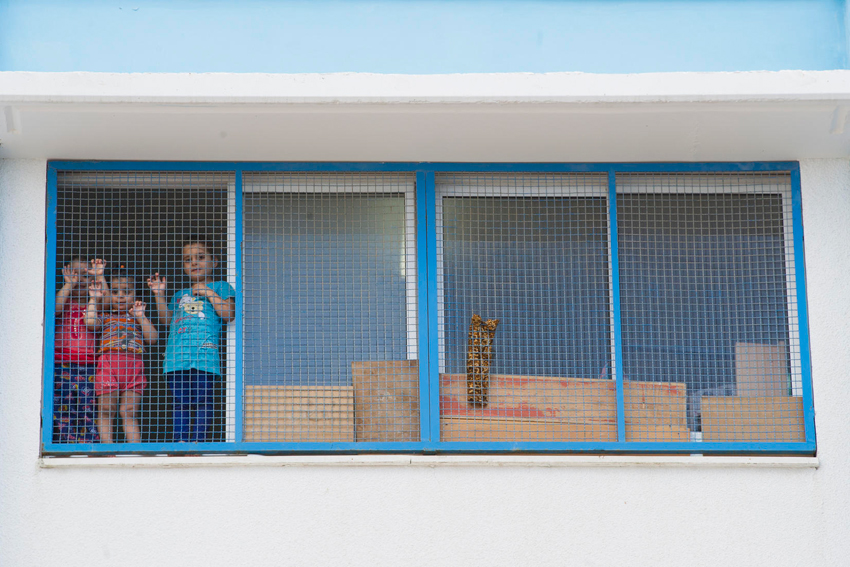 Children look out from a window during Secretary-General Ban Ki-moon’s visit with internally displaced persons at the UNRWA Collective Centre in Gaza. UN Photo/Eskinder Debebe 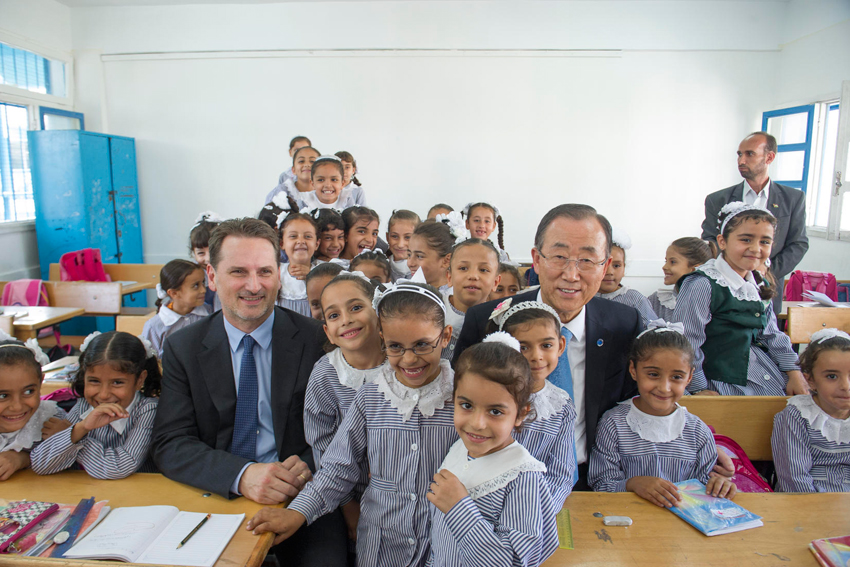 Secretary-General Ban Ki-moon’s visit with Pierre Krähenbühl, Commissioner-General of the UNRWA to a classroom at the UN school at the Jabalia refugee camp. UN Photo/Eskinder Debebe

He said that all the details relating to the location of UN facilities were shared with the Israeli military authorities again and again. Yet the shells fell where innocent civilians were seeking shelter. The Secretary-General reiterated his call for a full and independent investigation into the matter.

Mr. Ban is also expected to visit several other sites destroyed during last summer's conflict, including a compound belonging to the UN Relief and Works Agency (UNRWA) and a UN Development Programme (UNDP) Fishing Project.

Later in the day in Gaza, the Secretary-General held a town hall meeting with UN Staff today and salute the sacrifice made by those who had died during the conflict.

Before leaving Israel to travel back to New York, Mr. Ban visited the Ein Hash Losa kibbutz and met with about a dozen family members who were affected by rocket fire and tunnel activity from Gaza.

Speaking later to the press, the Secretary-General said that he had been “shocked and alarmed by the underground tunnels which have been used for penetration for terrorist purposes.”

“I have been particularly condemning these rocket attacks by Hamas from the air and also attacks through leftover tunnels, underground tunnels. This is unacceptable,” the UN chief declared, reiterating that rocket attacks killing the civilian population is not acceptable and should be condemned. “Nobody should live under constant threat or fear by these rockets and the penetrating alarming underground tunnels.”

He went on to say that during his trip through the region, he has been urging leaders on both sides to address the underlying issues. “For that, they should sit down together and resume their peace talks. That is the only way – a viable option, so that the two peoples can enjoy peace and harmony and security.”

The Secretary-General said that he had met in southern Israel the grandparents and uncle of Daniel – a four year old boy. “What has he done wrong? Why has he to die? Even without knowing anything, even without being able to grow up at the age of four years. This is very sad. I conveyed my deepest condolences to the family.”

The UN chief said that he could only hope his words “helped…even a little bit [in] healing their wounds. But that may not be enough. For that, I urge again – the two parties should, must address all the underlying issues to bring peace and harmony and security to the two peoples.”

Following today’s meeting with Palestinian ministers, Mr. Ban reiterated his support for the National Consensus on the basis of the Palestinian Liberation Organization (PLO) commitments.

“You have sent a strong message to the world by forging the government of national consensus and by convening the first historic meeting of the Unity Government under the leadership of President Abbas and chaired by Prime Minister Hamdullah,” said Mr. Ban.

“You are building one Palestine which is essential…By having another meeting with cabinet ministers in Gaza, I am seeing one united Palestinian government,” he added.

In the wake of the donor conference over the previous weekend, the World Health Organization (WHO) has appealed for $8.7 million in order to improve Gaza’s health system. That would be part of a $45.1 million project to repair and enhance Gaza’s health care system.

According to a preliminary survey, 67 health facilities had been damaged and the stock of essential medicine and the health staff has been exhausted.

It has been estimate that up to 20 per cent of Gaza’s population, or some 360,000 people, could need treatment for mental-health disorders in the wake of the hostilities. There was a shortage of health services before the conflict, which was even more urgent now.