A shipwreck found off northern Haiti could not be the Santa Maria, the flagship of Christopher Columbus's first crossing of the Atlantic, the United Nations cultural agency today reported.

“There is now incontestable proof that the wreck is from a much later period,” according to a report from the UN Educational, Scientific and Cultural Organization (UNESCO).

The bronze or copper fasteners found on the site, near the Coque Vieille Reef, point to shipbuilding techniques of the late 17th or 18th centuries, when ships were sheathed in copper. The Santa Maria, which ran aground on the night of 24 to 25 December 1492, would have used only iron or wood fasteners.

Moreover, in view of contemporary accounts – notably the journal of Christopher Columbus, transcribed by Bartolome de las Casas – the wreck is too far from the shore to be that of the Santa Maria.

The report was drafted by UNESCO mission leader Xavier Nieto Prieto, whose team visited Cap-Haitian, north of the island, between 9 and 14 September. He was joined by Tatiana Villega, of UNESCO's Office in Haiti, Kenrick Demesvar, of the Haitian Ministry of Culture, and Maksaen Denis, of Haiti's National Bureau of Ethnology.

In a letter dated 12 June, Haitian Culture Minister Monique Rocourt asked for the support of the Scientific and Technical Advisory Body of UNESCO's 2001 Convention on the Protection of Underwater Cultural Heritage, requesting that a mission of experts be sent to the site.

The letter followed an announcement in May that Bill Clifford, an American underwater explorer, had located the wreck of the 'Santa Maria.' He first visited the site in 2003 and identified a cannon believed to date from the 15th century. The cannon has since disappeared.

UNESCO's Underwater Heritage Convention, adopted 2001, aims to ensure the safeguarding of underwater heritage and support research and international cooperation in this field. The States – numbering 48 including Haiti – that have ratified it undertake to preserve this heritage, prevent commercial exploitation of sites and fight the illicit trafficking in stolen artefacts.

This latest UNESCO report recommends further exploration to find the Santa Maria and to draw an inventory of other major wrecks in the area.

It also calls on Haiti to adopt legislative measures to enhance the protection of underwater heritage, notably with regard to the attribution of authorizations for the excavation of underwater archaeological sites, and meet the standards of the Convention.

♦ Receive daily updates directly in your inbox - Subscribe here to a topic.
♦ Download the UN News app for your iOS or Android devices.
shipwreck 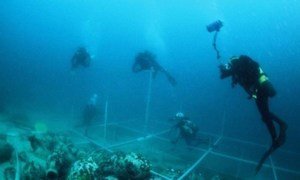 The United Nations Educational, Scientific and Cultural Organization (UNESCO) announced today that it will provide technical assistance requested by the Government of Haiti and send a mission to the site of an underwater shipwreck, which may be that of the Santa Maria, the flagship of Christopher Columbus’s first voyage to America.