While there has been great social and economic progress across Africa, its economies have not kept pace with legitimate demands, including providing jobs to young people, said United Nations Deputy Secretary-General Jan Eliasson at a high-level meeting of regional partners held today at Headquarters.

“Unemployment is not just an economic challenge. It is also a social, psychological and political one,” said Mr. Eliasson at the briefing by African Regional Economic Communities (RECs) to Member States and the UN system.

The event, on The Role of Africa’s RECs in Consolidating Peace, Security, Governance and Development in the Context of Agenda 2063, was co-organized by the Office of the Special Adviser on Africa, Permanent Observer Mission of the African Union to the UN, and the UN Development Programme (UNDP) Regional Bureau for Africa.

According to a press statement, the discussions focused on development and the long-term future of the continent in the light of African Union’s visionary Continental Agenda 2063.

Delivering remarks this morning, Mr. Eliasson said that the Agenda 2063 plan will need to be forged around stronger regional integration, which requires increased competitiveness in African economies. The process should also be underpinned by major investments in human development, science, technology and infrastructure.

He pointed out that trade among African countries remains limited, mainly because they do not have adequate railways, roads and other infrastructure. Many African economies also lack sufficient economic diversification, productivity and well-functioning institutions.

Some African countries have experienced impressive growth thanks to the leadership of African Governments, the African Union, the RECs and the UN Economic Commission for Africa (ECA).

But while more African children go to school than ever before and there have been great advancements in women’s empowerment and gender equality, Africa is off track to meeting many of the Millennium Development Goals (MDGs).

Mr. Eliasson commended the role of the Economic Community of Central African States (ECCAS) in mediating the ongoing crisis in CAR.

Meanwhile, the Ebola virus is presenting new and very serious challenges in West Africa, Mr. Eliasson said, mentioning the efforts of the Economic Community of West African States (ECOWAS) and the African Union to quickly mobilize resources and awareness.

“The United Nations has mobilized to a degree rarely seen,” said Mr. Eliasson adding that the newly UN Mission for Ebola Emergency Response (UNMEER) are working hard to stop the outbreak and treat the infected.

Also delivering remarks today, Under-Secretary General and UN Special Adviser on Africa, Maged Abdelaziz, said these annual meetings contribute to filling the gap and raise global awareness on the work of the RECs.

“Agenda 2063 embodies a renewed commitment by Africa’s political leadership to achieving the pan-African vision of an integrated, prosperous and peaceful Africa, driven by its own citizens and representing a dynamic force in the global arena.”

According to the press release, efforts to finalize the development of Agenda 2063 are still ongoing. However, it is currently envisaged that Agenda 2063 and its first 10-year plan will be adopted at the next Summit of the Assembly of Heads of State and Government of the African Union in January 2015. 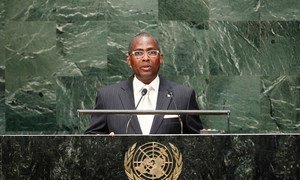 With a new sustainable development agenda as the focus of this year’s annual General Assembly debate, African leaders today called on the United Nations to take into consideration the continent’s specific realities and challenges.