Recent developments in Africa indicate that the continent is increasingly moving in the “direction of peace” and enhanced security, the United Nations Secretary-General told journalists in the Ethiopian capital, Addis Ababa, on Monday.

António Guterres was there to take part in the second annual UN-African Union conference, part of ongoing efforts to strengthen the relationship between the two organizations. The two-day meeting covers a wide range of topics, and Mr. Guterres spoke about the partners’ close collaboration in areas such as peace and security.

“We feel a wind blowing in the direction of peace,” he said, referring to recent developments such as the historic visit by Ethiopia’s Prime Minister to rival and neighbour Eritrea, as well as peace talks on South Sudan, where conflict has raged since 2013.

“All this gives us hope that the African continent will be moving more and more in the right direction in peace and security,” he added, telling delegates that the UN could not afford to fail in its dealings with the continent.

When African troops are fighting terrorists in the Sahel, they are not only protecting the citizens of the Sahel. They are protecting the whole world - UN chief António Guterres

But the UN chief also focused on what he described as the “dramatic crises” in Africa, where the UN has deployed peacekeeping missions in four countries: the Central African Republic (CAR), the Democratic Republic of the Congo (DRC), Mali and South Sudan.

He said the rise of armed groups and international terrorist organizations such as Boko Haram, means that these operations are not involved in “traditional” peacekeeping, and he cited the need for more funding, particularly in enforcing peace and countering terrorism.

“We need to understand that when African troops are fighting terrorists in the Sahel, they are not only protecting the citizens of the Sahel. They are protecting the whole world. And the world must be in solidarity with Africa, as African forces are protecting us all,” he stated.

The Secretary-General also called for greater support for the UN’s Agenda 2030 and African Union’s Agenda 2063, both of which address long-term economic development.

He appealed to the international community to take action against the flow of illegal funds, money-laundering and tax evasion, which cost Africa $50 billion every year.

♦ Receive daily updates directly in your inbox - Subscribe here to a topic.
♦ Download the UN News app for your iOS or Android devices.
Peace and security|peacekeeping|Economic development|development|Africa 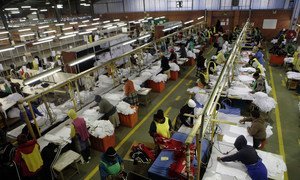