UNICEF/Bassam Khabieh
A boy drinks the remaining water in his jerrycan while waiting with other children in a queue for safe water in the town of Douma in the East Ghouta area of Rural Damascus, Syria.
30 September 2014

With winter fast approaching and the conflict in Syria showing no signs of abating, the United Nations humanitarian chief today called for sustained pressure on the parties to ensure access to those in need of assistance as well as financial support to maintain vital aid operations.

Some 11 million people urgently need assistance in Syria, and more than 4.7 million of them are in areas which aid agencies can only reach by bringing relief supplies across borders, according to the UN Office for the Coordination of Humanitarian Affairs (OCHA).

“Sustained access to provide the most basic assistance to some 4.7 million people who have been hard to reach for months, some for years continues to be a major challenge. And a further 241,000 people are deliberately besieged, mostly by Government forces, and are denied assistance,” Under-Secretary-General for Humanitarian Affairs Valerie Amos told the Security Council.

In February of this year, the Council adopted resolution 2139 with the aim of pressing the parties to the conflict to abide by basic international legal obligations and to reduce the suffering of ordinary people caught up in the conflict.

Then in July, the 15-member body adopted resolution 2165, authorizing cross-border and cross-line access for the UN and its partners to deliver humanitarian aid in Syria without the consent of the State.

According to OCHA, 14 additional cross-border aid convoys authorized by the Council have delivered assistance for more than 500,000 people since July.

However, access to those most in need continues to be a challenge, Ms. Amos said, as she presented the Secretary-General's report on humanitarian access during the period from 19 August to 17 September.

“Intense fighting and shifting conflict lines continue to make the delivery of aid difficult and dangerous. The parties to the conflict continue to put obstacles in the way of the sustained access that humanitarian organizations require,” she stated.

Parties to the conflict also continue to block aid deliveries to areas outside their control, she continued, noting that this includes armed opposition groups in Aleppo governorate which have prevented aid from being delivered to areas under the control of the militant group known as the Islamic State in Iraq and the Levant (ISIL).

“The Government continues to use administrative procedures to hinder the rapid and sustained delivery of aid,” said Ms. Amos, who is also UN Emergency Relief Coordinator. “While the changes introduced by the Government on loading plans and imports from official entry points are welcome, the process for deliveries to hard-to-reach areas remains far too cumbersome.

“And the centralization of approval for deliveries continues to hamper our operations, as does the need to negotiate delivery routes once approval has been received.”

In his report, Secretary-General Ban Ki-moon noted that despite the valiant efforts of humanitarian workers delivering aid at great personal risk, Syria remains the world's largest and most pressing humanitarian crisis, with regional and global implications.

“Needs, driven by violence, continue to outpace the response. And neighbouring countries continue to host large numbers of refugees,” he wrote.

Ms. Amos said the UN and partner agencies continue to seek to reach the maximum number of people by the most direct and effective routes – across conflict lines, cross-border or through regular aid deliveries.

“Despite the modest progress, sustained pressure on all parties to ensure that they respect and implement resolutions 2139 and 2165 is crucial,” she stressed.

Financial support is also vital, she added, noting that without additional funds, the World Food Programme will be forced to end its operations completely within two months. Rations have already been cut in order to continue to reach as many people as possible.

Yesterday, Ms. Amos welcomed Qatar's announcement of $20 million for the Humanitarian Pooled Fund, saying it will help enable the UN and its partners to help people in the hard-to-reach areas inside Syria.

“Winter is fast approaching and vital supplies are needed to protect people from the cold. Neighbouring countries also need urgent support so that they can continue to shelter millions of refugees,” she pointed out in her briefing.

“But most critical of all, the violence that has already killed over 190,000 people must stop.” 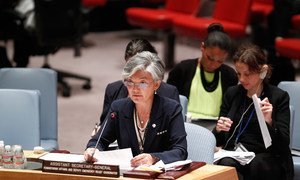 For the first time in six months, there has been some improvement recently on humanitarian access to Syria, but much more needs to be done by the parties to the conflict to ensure rapid and unhindered access to people in need, a senior United Nations relief official told the Security Council today.