26 September 2014
At the General Assembly today, Prime Minister of Malaysia, Mohd Najib Tun Abdul Razak paid tribute to both MH370 and MH17 flights – “twin tragedies” – that will hopefully change the global aviation system for the better.

Now, violent extremism and religious intolerance have “joined hands beneath a black flag.” The new and emboldened militants fighting in Iraq and Syria are a system of a political failure, of poor governance in fragile states and the conflict that still rages between Sunni and Shia.

“The fight against extremism is not about Christians versus Muslims, or Muslims versus Jews, but moderates versus extremists of all religions,” he said, stressing the need for a “coalition of moderates” to reclaim their respective religions.

Malaysia has been successful in marginalizing extremism and maintaining a multi-religious country, where different faiths co-exist. But “stability is never permanent; it must be actively maintained,” he said.

Extremists have called on Muslims to pledge allegiance to their self-proclaimed caliphates in Syria and Iraq; in Nigeria and Somalia; and in Kenya and Libya, and that “some answer this call is testament to our failure.”

He also condemned Israel’s disproportionate and indiscriminate attacks on Gaza and the brutal violence against Palestinian civilians in Gaza.

Nepalese Prime Minister Sushil Koirala also condemned terrorism in all its forms as “an anathema to humanity” and a serious threat to peace, security and development, calling for a coordinated global response to be organized under the aegis of the UN.

“We share the concerns over the growing scourge of terrorism, extremism and religious fundamentalism,” he said. ‘We urge for an early conclusion of a comprehensive convention on international terrorism and the effective implementation of the provisions of the UN global counter-terrorism measures.”

He also called for a more proactive UN engagement in Afghanistan, Iraq, Libya and Syria. “While supporting the independence, sovereignty, and territorial integrity of these countries, we urge the United Nations to play an active role for a political settlement and help these countries move towards national unity, reconciliation and reconstruction.”

On Ukraine Mr. Koirala said its people should enjoy the rights to freely decide their destiny without any outside interference. “It has been our consistent policy that sovereignty, territorial integrity, political independence and non-interference must be strictly adhered to in solution to disputes under all circumstances,” he added.

Peace will succeed only when people have a chance at a better life, Canada’s leader tells UN Assembly 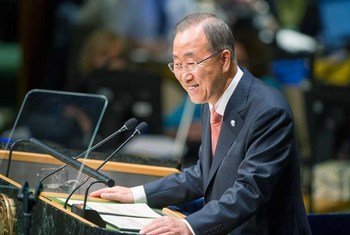