UN Photo/Mark Garten
As the General Assembly began the general debate of its sixty-ninth session, Secretary-General Ban Ki-moon presented to the Assembly his annual report on the work of the Organization.

“This year, the horizon of hope is darkened. Our hearts are made heavy by unspeakable acts and the deaths of innocents,” he told the assembled leaders from 193 nations. “Not since the end of the Second World War have there been so many refugees, displaced people and asylum seekers. Never before has the United Nations been asked to reach so many people with emergency food assistance and other life-saving supplies,” he said.

“It may seem as if the world is falling apart, as crises pile up and disease spreads. But leadership is precisely about finding the seeds of hope and nurturing them into something bigger. That is our duty. That is my call to you today.”

Mr. Ban’s annual opening message, which draws from his yearly report on the work of the Organization, was not entirely bleak. “Hope may be hard to discern, but it is there,” he said. “In clinics, classrooms and other places far from the spotlight, the development agenda is making remarkable progress.

"Global poverty, child mortality and maternal deaths have been cut in half. More remains to be done, but these and other gains show the power of the Millennium Development Goals and what we can do when we work together. Today an inspiring global conversation is taking place on an agenda for the next 15 years.”

But there was no mistaking the grim thrust of his “State of the World” address. “It has been a terrible year for the principles enshrined in the United Nations Charter,” he declared. “From barrel bombs to beheadings, from the deliberate starvation of civilians to the assault on hospitals, UN shelters and aid convoys, human rights and the rule of law are under attack.”

He recited a litany of global crises: the “latest tragedy” in Gaza with Palestinians and Israelis seemingly more polarized than ever; the volatile situation in and around Ukraine; South Sudan where the struggle for political power has killed thousands and exposed millions to the threat of famine; the fractured and traumatized Central African Republic; insurgency, terrorism, the illicit drug trade and organized crime in Mali and the Sahel.

The list went on: Somalia where a coalition of African States confronts the terrorist group Al-Shabab; Nigeria where Boko Haram’s “murderous onslaught gains strength, with shocking impacts on women and girls;” Iraq and Syria where “we see new depths of barbarity with each passing day, and devastating spill-over effects” across the region.

“We need decisive action to stop atrocity crimes and frank discussion on what created the threat in the first place,” Mr. Ban said. “The people of the region have been forced to walk on the broken shards of bad governance and bad decisions that failed to respect international law and basic human rights.”

Declaring that far more must be done to anticipate problems and reach early political consensus, he appealed for crucial unity in the 15-member Security Council, the spearhead for UN action, stressing that when the body acts as one results follow, as with the elimination of Syria’s chemical weapons programme.

Broaching several other issues, Mr. Ban stressed the need for transformation in achieving development goals. “I can think of no better place to start than with opening doors and shattering ceilings for women and girls,” he said. “Look at any crisis – from poverty to disaster to disease to illiteracy ¬– and you will see women and girls suffering the most. We cannot fulfil 100 per cent of the world’s potential by excluding 50 per cent of the world’s people.”

He highlighted the crucial importance for funding in dealing with climate change, the post 2015- development efforts, and the “unprecedented crisis” of the Ebola outbreak in West Africa where a twenty-fold surge in care, tracking, transport and equipment is needed.

In conclusion, Mr. Ban again stressed humankind’s role in creating many of the crises the world now faces and its responsibility to eliminate them. “Today we face far more man-made crises than natural calamities,” he declared. “We may not control Mother Nature, but who else but us is responsible for securing peace and justice in our world today?

“War. Poverty. Ignorance. Crises caused by people can be stopped by people. I do not think we can yet feel comfortable about the world our generation is leaving to our children. Still, I have hope. I draw it from our Charter, our enduring guide in times of dramatic challenge and change.” 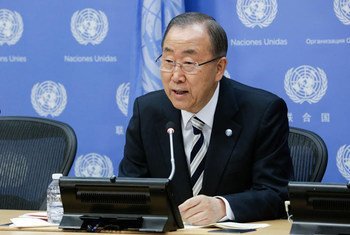 16 September 2014
Just days ahead of opening the high-level segment of the 69th General Assembly session, United Nations Secretary General Ban Ki-moon today called on world leaders to unite in the face of the myriad devastating crises to uphold human dignity, the rule of law and the principles of the UN Charter.