IRIN
Hundreds of people were killed and injured, and hundreds of women raped at the 28 September Stadium in 2009, in Conakry, Guinea.
26 September 2014

The top United Nations human rights official today urged the Government of Guinea to take immediate and concrete steps to advance the investigation and prosecution of rights violations, including killings, rapes and enforced disappearances, allegedly committed by security forces against peaceful protestors at a football stadium five years ago.

The Office of the High Commissioner for Human Rights (OHCHR) said in a press release that on 28 September 2009, tens of thousands of opposition protestors were attacked with tear gas and live ammunition by Guinean security forces. At least 156 people died, 109 women were raped and more than 1,000 people were injured. The whereabouts of dozens of individuals remain unknown five years after the events.

In the aftermath, a UN-led international commission of inquiry recommended that the Government should take appropriate measures to respond to this situation.

The Guinean Government set up an investigation led by a team of three magistrates, but the probe has yet to be concluded and not a single prosecution has taken place so far.

“Five years after the Guinea stadium events, justice remains elusive for the victims,” Mr. Zeid said. “It is particularly disturbing that at least two high-ranking officials who were charged in relation to the September 2009 violations remain in influential positions within the defence and security forces.”

Mr. Zeid also noted that many officials have been reluctant to respond to court summons.

“Immediate, concrete steps need to be taken to advance the quest for justice and the fight against impunity for the crimes and human rights violations that were perpetrated against unarmed civilians in Conakry in 2009,” he said, adding “a clear message needs to be sent from the highest levels that cooperation with the investigation is compulsory.”

“The best way for Guinea to put this terrible episode behind it is to confront it honestly, deal with it in accordance with the law, and in so doing reduce the possibility of such crimes being committed again by the country’s authorities,” the High Commissioner said.

♦ Receive daily updates directly in your inbox - Subscribe here to a topic.
♦ Download the UN News app for your iOS or Android devices.
Guinea

Secretary-General ‘deeply concerned’ at students’ deaths during demonstrations in Guinea 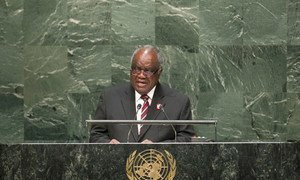 Availing themselves of the spotlight afforded by the annual high-level meeting of the General Assembly, African leaders served notice today that the multi-year United Nations agenda for sustainable development now being drawn up must address fully their continent’s specific concerns.