Service and Sacrifice: Guinean peacekeepers make their mark in Mali

MINUSMA/Harandane Dicko
The Guinean contingent of MINUSMA ensures the security of the MINUSMA camp, through the observation and monitoring of strategic points around the city of Kidal, in Northern Mali, called Galaxies.

Service and Sacrifice: Guinean peacekeepers make their mark in Mali

As the sun rises over Mali’s vast desert, a group of 20 peacekeepers prepare their equipment and line up to receive instructions before heading out for their first patrol of the day on one of the most dangerous roads in the region.

They are Guinean Blue Helmets from the United Nations Multidimensional Integrated Stabilization Mission in Mali (MINUSMA) based in the volatile town of Kidal, in the north.

Following the outbreak of the conflict in 2012, explosive hazards and complex attacks have become a new threat in the country, with wide ranging and detrimental effects on the safety and freedom of movement in the central and northern parts of Mali.

“Dropping your guard can be fatal” – Guinean Blue Helmet

MINUSMA/Harandane Dicko
Among other activities, the Guinean contingent ensures the safety of the civilian population, thanks to its monitoring of the vehicles which return through checkpoints to the city of Kidal.

They are ready. Guinean peacekeepers climb into two armoured personnel carriers (APC), that would rumble out of the UN base soon.

For Guinean Sergeant Mamady Keita, the threat of landmines is always present, “No mission can be done without our presence, the road is sandy and easy for the insurgents to hide explosive devices underground, “he said standing outside his APC, his best defence during the operation.

Under a blazing sun the temperature is reaching its peak, the so-called ‘Search and Detect’ Guinean team, on foot, carefully search for explosive devices and hiding places for these bombs, looking at the sandy roads.  “Out here, dropping your guard can be fatal, there is always a chance that the situation gets a turn to the worst”, Lieutenant Maurice Brehemon said.

No mission can be done without our presence, the road is sandy and easy for the insurgents to hide explosive devices underground Sergeant Mamady Keita

All Guinean soldiers, like all military contingents joining  MINUSMA, have to go through intense in-country pre-deployment training on explosive threats and risks. They must be prepared for anything when they arrive in Mali.

These pre-deployment training measures help to better equip the peacekeepers with skills to protect them, help them protect others and improve resilience and safety to aid in the delivery of MINUSMA’s mandate.

The job comes with daily challenges. This morning patrol was uneventful, and the Blue Helmets returned safe and sound to the base. But the next day, a UN vehicle ran over a mine. Fourteen peacekeepers were injured.

Almost 850 peacekeepers from Guinea are serving in Mali. Guinea is one of the largest contributing countries to MINUSMA. Mamady knows he is risking his life while promoting peace. Guinea is a neighbour country with strong ties to Mali. Its soldiers are often called “brothers in arms” in a regional sense.

MINUSMA/Harandane Dicko
The Guinean contingent of MINUSMA is composed of 850 soldiers, including 16 women, and is based in Kidal in the extreme north of Mali. Seen here, a Guinean UN peacekeeper takes up position in the town of Kidal.

Every day the women and men of the United Nations mission in Mali are on the frontline to protect civilians and promote peace in one of the most challenging missions in the world. Since July 2013, 103 peacekeepers have been killed in hostile incidents.

For Pelagie Diawara, one of the 16 women of the Guinean battalion, the beginning of her first mission with the United Nations was difficult. She missed her family and the intense desert heat was a challenge. “It was a tough decision to leave my family, but I am proud to be here in this neighbouring country to help our brothers and sisters from Mali to make peace in this country. “

Between landmines and improvised explosive devices, driving on the roads of northern Mali is a dangerous exercise.  Today, some 14,000 UN peacekeepers from more than 56 countries are serving in Mali.

These women and men are working in an extremely dangerous environment, far away from their families, and very conscious of how their personal sacrifice is crucial to helping build a durable peace.

MINUSMA/Harandane Dicko
The Guinean contingent conducts mine search and improvised explosive device activities on the roads used by MINUSMA vehicles. Shown here a member of the Guinean Search and Detect team of UN peacekeepers surveys a road in Kidal in the far north of Mali.

Find original story by the UN mission in Mali here. 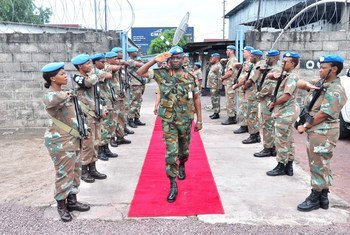