25 September 2014
The Joint United Nations Programme on HIV/AIDS (UNAIDS) today appointed British fashion designer Victoria Beckham as its International Goodwill Ambassador, with a focus on women and children affected by the virus.

“I dream of a generation free from HIV and I know that Victoria’s support will help us to achieve this shared goal,” said Michel Sidibé, Executive Director of UNAIDS. “Her creativity, innovation and outreach will amplify our efforts and bring us one important step closer towards ending the AIDS epidemic.”

In her new role as an Ambassador for UNAIDS, which was announced in New York on the margins of the annual high-level debate of the UN General Assembly, Ms. Beckham will work towards ensuring that all children are born free from HIV and that children and women who are living with and affected by HIV have access to medicines and care.

“This is the beginning of an important journey for me. As a woman and a mother I have a responsibility to support other women,” said Ms. Beckham.

“I am proud and honoured to be working with UNAIDS in this new role to help to raise resources and awareness to support and empower women and children affected by HIV.”

In February this year, the mother of four visited HIV clinics in Cape Town, South Africa, where she learned about the importance of antiretroviral therapy and about how children are being left behind in accessing treatment.

Antiretroviral therapy can reduce the risk of a mother living with HIV passing the virus to her child to below 5 per cent, according to a news release issued by UNAIDS.

However, in 2013, one third of pregnant women living with HIV did not have access to the life-saving medicines and 240,000 children became infected with HIV.

Over the past five years providing access to antiretroviral medicines for pregnant women living with HIV has helped 900,000 children to be born free from HIV. 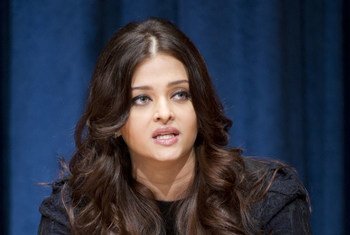 24 September 2012
The United Nations today announced the addition of Bollywood icon and former Miss World winner Aishwarya Rai Bachchan to its roster of International Goodwill Ambassadors, focussed on helping the Organization’s efforts in combating the spread of HIV infections in children.