25 September 2014
Great gains have been made in the global effort to achieve the Millennium Development Goals, known worldwide as the “MDGs,” but with the deadline fast approaching more must be done to fully meet the targets set for 2015 and beyond, Secretary-General Ban Ki-moon said today.

In his remarks to a gathering of 300 global leaders convened by the MDG Advocacy Group, Mr. Ban applauded the successes made so far in pushing forward with the Goals and in having “raised awareness, mobilized resources, and helped shape policy.”

“The MDGs have transformed the lives of millions of people,” he told delegates at the gathering, which was held on the margins of the General Assembly’s annual high-level debate.

The meeting, organized by the MDG Advocacy Group, a body of global leaders and eminent personalities assembled by the Secretary-General to promote the implementation of the Goals, also marked the release of the Group’s latest report – Accelerating Action: Global Leaders on Challenges and Opportunities for MDG Achievement – which confirms the strides made so far.

The eight MDGs, agreed by world leaders at a UN summit in 2000, are described as a 15-year roadmap to fight poverty, hunger and disease, protect the environment and expand education, basic health and women’s empowerment.

According to the new report, in fact, the past two decades has seen the likelihood of a child dying before the age of five nearly reduced by half while the maternal mortality ratio has dropped by 45 per cent. At the same time, antiretroviral therapy for HIV-infected people has saved an estimated 6.6 million lives and another estimated 3.3 million people were saved from malaria due to the diffusion of major preventions such as bed nets and treatments. Efforts to fight tuberculosis, meanwhile, have saved an estimated 22 million lives.

“Fewer people are in poverty. More children are in school. We are making inroads in the fight against malaria and tuberculosis. Families and communities have greater access to an improved drinking water source,” the Secretary-General noted.

With 462 days remaining until the MDG deadline, the report strikes an optimistic note, adding that with many of the Goals already met – including the reduction of poverty, increasing access to clean drinking water, improving the lives of slum dwellers, and achieving gender parity in schools – many more targets are also within reach by the end of 2015.

But, Mr. Ban warned, much more remained to be done in order to “finish the job.”

“We must do more to finish our targets on hunger and chronic child malnutrition. Faster progress is needed to meet the goals of reducing child and maternal mortality and to improve access to sanitation,” he continued.

The Secretary-General urged delegates to help focus on what he described as “two critical fronts” in the battle towards realizing the Goals: accelerating progress towards meeting the MDGs and preparing for a post-2015 world.

“We need a strong successor framework in place,” affirmed Mr. Ban. “Building mechanisms for effective partnerships and multi-stakeholder accountability will be critical to the success of the post-2015 development agenda.” 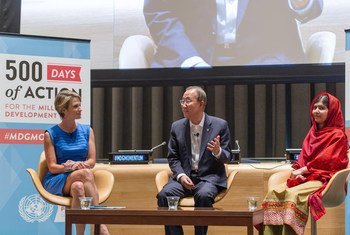 18 August 2014
With Malala Yousafzai by his side, Secretary-General Ban Ki-moon today marked 500 days of action until the deadline to reach the Millennium Development Goals, known worldwide as the “MDGs.”