16 September 2014
Just days ahead of opening the high-level segment of the 69th General Assembly session, United Nations Secretary General Ban Ki-moon today called on world leaders to unite in the face of the myriad devastating crises to uphold human dignity, the rule of law and the principles of the UN Charter.

Just days ahead of opening the high-level segment of the 69th General Assembly session, United Nations Secretary-General Ban Ki-moon today called on world leaders to unite in the face of the myriad devastating crises to uphold human dignity, the rule of law and the principles of the UN Charter.

“At this time of turmoil, the next two weeks will highlight again the indispensable role of the United Nations in tackling global threats and seizing opportunities for common progress,” said Mr. Ban as he spoke to journalists at the world body’s New York Headquarters.

“We are anticipating an impressive turnout of leaders from Government, business, finance and civil society. Most important, we are expecting significant commitments and progress,” the Secretary-General said, adding that he hoped to address the horrendous violence in Syria and Iraq, where conflict and governance failures have provided a breeding ground for extremism.

Meanwhile, in the aftermath of “yet another needless and devastating war” in Gaza, Israelis and Palestinians seem more polarized than ever. International consensus is critical to address the challenges posed in an increasingly complex world.

He said world leaders must act against serious threats to global and regional peace and security including in Ukraine, Libya, Mali, South Sudan and the Central African Republic. Terrorist organizations throughout the world are not only carrying out attacks but seizing large areas of land beyond the government’s control. In Nigeria, the advances of Boko Haram grow more alarming every day.

“We will not let these crises be forgotten – and we will meet next week at the highest level to determine what more we can do,” Mr. Ban said. This year’s General Assembly will be attended by more than 140 Heads of State or Government, civil society leaders, CEOs and other influential global figures.

“The world is facing multiple crises. Each has its own dynamics, and requires its own approach. But all have featured atrocious attacks on civilians, including children. All have dangerous sectarian, ethnic or tribal dimensions. And many have seen sharp divisions within the international community itself over the response,” Mr. Ban said.

Meanwhile, on the heels of yet another meeting on the outbreak of Ebola held today in Geneva, Mr. Ban urged the international community to act immediately to contain the epidemic and treat those infected. He pledged to continue his efforts to mobilize the international community to help meet the health services, supplies, food and other requirements.

“We cannot allow travel bans on travel or transport to slow us down. We need isolation of people affected by Ebola – not nations struggling to cope with it,” Mr. Ban said.

“This is not just a health crisis; it has grave economic and social consequences that could spread far beyond the affected countries.”

On a broader range, the new session of the General Assembly will be a pivotal period for our efforts to defeat poverty and adopt a new generation of sustainable development goals.

“Action on climate change is urgent. The more we delay, the more we will pay in lives and money,” said Mr. Ban, emphasizing the importance of his climate summit next week, which will aim to mobilize political will for a universal legal agreement next year in Paris and to generate steps to reduce greenhouse gas emissions.

Today he also announced that actor Leonardo DiCaprio will be joining the United Nations in its climate advocacy efforts and commended Mr. DiCaprio on his long-standing commitment to environmental causes.

“Today, I am appointing him as our newest United Nations Messenger of Peace, with a special focus on climate change issues. His global stardom is the perfect match for this global challenge. His first act as a Messenger of Peace will be to address the opening of the Climate Summit,” the Secretary-General said. 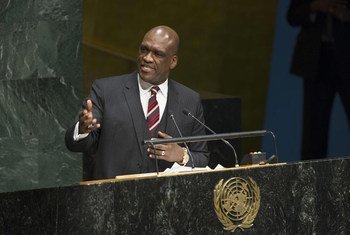