IRIN/Kenneth Odiwuor
A market street in Goma, the capital of the eastern province of North Kivu in the Democratic Republic of the Congo (DRC).

22 September 2014
United Nations Secretary General Ban Ki-moon today said that addressing the root causes of the conflict in eastern Democratic Republic of the Congo (DRC) and the region requires a recommitment to all national and regional commitments under the agreed-to peace Framework.

“In recent months, there has been progress on several commitments under the Framework. The capacity of armed groups to attack civilians in eastern DRC has been impaired, particularly after the defeat of the former M23 at the end of 2013. This has improved security in the region,” said Mr. Ban at a Headquarters meeting of the signatories of the Peace, Security and Cooperation Framework for the DRC and the region, who wrapped up their work with the approval of a Communiqué.

On 24 February 2013, recognizing the recurring cycles of conflict and violence that permeate the eastern DRC, 11 African countries Framework, which represents an avenue of hope for the region’s people to build stability by addressing the root causes of the conflict and fostering trust between neighbours.

At today’s fourth meeting reviewing the progress of the Framework, Mr. Ban was joined by several high-level officials including President Mohamed Ould Abdel Aziz of Mauritania, President Robert Mugabe of Zimbabwe, and Vice-President Manuel Domingos Vincente of Angola. Several officials from the African Union and the South African Development Community (SADC) were also in attendance.

“Over the next few years, several countries of the Great Lakes region will be holding pivotal elections. This should strengthen the democratic culture in the region. I hope these countries will emerge from the elections stronger, more united and more stable,” said Mr. Ban.

But several armed groups continue to hamper these efforts. The Nairobi Declarations of the Kampala process have been implemented too slowly. And there remains a lack of trust among some countries of the region.

“We must speed up the implementation of the Nairobi Declarations of the Kampala Process, including the repatriation of eligible former M23 elements to the DRC. And we must continue building trust and confidence among countries of the region,” Mr. Ban added.

He recalled that at the third meeting, held at the African Union Headquarters in Addis Ababa in January, participants endorsed the regional Plan of Action and 15 priority activities for implementation of the Framework. They also requested that the Technical Support Committee submit a progress report on the implementation of the regional Plan of Action.

Presented by the Secretary-General’s Special Envoy and the Special Representative of the African Union Chairperson, the report documents progress and offers recommendations.

“I welcome the collective and unequivocal message to the FDLR that they should voluntarily surrender and disarm before the 2nd of January 2015,” the UN chief said.

The Secretary-General also underscored the need for donors, especially the African Development Bank, the European Union, the World Bank and bilateral partners, to remain committed to supporting initiatives for peace, security and cooperation in the region.

“We should spare no effort to end the instability that has affected millions of people and impeded development and prosperity in the region for far too long,” Mr. Ban reiterated.

In their remarks, the regional leaders expressed their appreciation to former Special Envoy Mary Robinson for her valuable efforts to achieve peace and stability in eastern DRC and the region, and welcomed Mr. Said Djinnit as the new Special Envoy of the Secretary-General for the Great Lakes Region.

Speaking to the leaders for the first time, Special Envoy Djinnit noted: “The Great Lakes region is at a crossroads. It can only realize its vast potential once sensitive security concerns are fully resolved and relations between neighbouring countries improve.” He pledged to work closely with all key stakeholders to ensure that the regional accord, which has become known as the “Framework of Hope”, delivers on its promises. 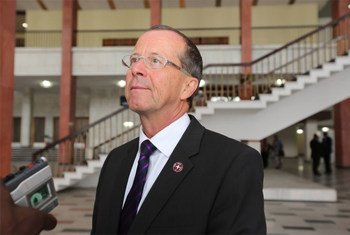 14 August 2014
A senior United Nations official today condemned the murder of six members of the same family in the eastern Democratic Republic of the Congo (DRC) and urged those living in the town of Mutarule to practice restraint to avoid further escalation.