Entitled “illUmiNations: Protecting Our Planet”, and organized in partnership with the Oceanic Preservation Society (OPS) and Obscura Digital, the projections were shown on the white marble west facade of the UN General Assembly Hall and north facade of the Secretariat building from 7:30 to 11 p.m. Saturday evening.

With its striking scenes, the display provided a breathtaking visual reminder of what is at stake as Member States, as well leaders from finance, businesses, civil society, and the public and private sectors, prepare to gather at the UN Tuesday, 23 September.

The Secretary-General's Climate Summit aims to catalyze ambitious action on the ground to reduce emissions, strengthen climate resilience and mobilize political action toward a meaningful, robust, universal, and legal climate agreement by 2015.

“We must make our voices heard. These exceptional projections being shown at the United Nations will help draw attention to the need to make climate action a reality in every community and every society,” Mr. Ban urged in a press release on the event, which was organized in partnership with UN Department of Public Information

The OPS was expected to kick off illUmiNations with the arrival of professional racecar driver and environmental activist, Leilani Münter, in a specially-designed electric Tesla vehicle outfitted with a high-tech mobile projection unit.

“I think it's the biggest story on the planet,” said Louis Psihoyos, who founded the OPS Society and directed the 12-minute piece, which will be shown in a loop on Saturday night, then be dismantled. A video of the event will be posted on YouTube next week.

“This event is all about inspiring people,” he added about the display, which was expected to include a 3 minute solutions segment with the photographic works of Yann Arthulic Informatoins-Bertrand, telling the story of climate change and highlighting actions that Governments, businesses, industry and civil society can take to shift toward a low-carbon economy and strengthen adaptation strategies.

The finale of the projection show was set to included the photographic works of Sebastião Salgado.

“There's no bigger billboard on the planet,” says Academy Award-winning producer Fisher Stevens, who produced the work. “The projections that will stream across the UN General Assembly Hall and north Secretariat building are a call to action on the most urgent issue of our times.” 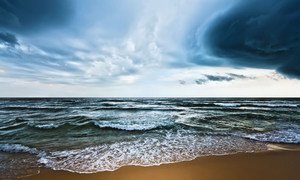 The United Nations weather agency today voiced concerns over the surge of carbon dioxide concentration in the atmosphere, which has reached a new record high in 2013, amid worrying sings that oceans and biosphere seem unable to soak up emissions as quickly as they used to.