Three years after the fall of their former regime, the Libyan people find themselves nowhere closer to realizing their hopes and aspirations for a better future, the top UN official in Libya said today, noting the urgency to take advantage of a “small window of opportunity.”

“The small window of opportunity before us for a peaceful resolution to the current crisis should not be missed,” Bernardino León, head of the UN Support Mission (UNSMIL) told the Security Council in New York. “Libya’s leaders will have to act quickly, and seek a political solution through a meaningful and inclusive dialogue.”

“Given the urgency I intend to follow up shortly with further visits to Libya,” Mr. León said.

The envoy, who is also the Secretary-General’s Special Representative, briefed Council members on his first visit to Libya since his appointment, and said he conveyed to all his interlocutors there the Council’s commitment to Libya, expressed in a new resolution, by which the 15-nation body would hold accountable anyone actively undermining the country’s political process, or responsible for a continuation of armed conflict or for violations of human rights and international humanitarian law.

The Council last week adopted resolution 2174 (2014), which also tightened the arms embargo and expanded the categories of people and entities to which sanctions may apply.

Mr. León told the Council today that despite repeated calls for an immediate end to the violence, the situation on the ground “remains extremely volatile and precarious” and that “efforts aimed at resolving the current crisis and resuming the political process cannot make progress against the backdrop of continued fighting.”

He reported that in eastern Libya, renewed military confrontations in Benghazi threaten to exact an increasingly heavier toll on the civilian population, while in the west, an unrelenting campaign of indiscriminate shelling continues to target parts of Tripoli, causing untold suffering on the part of the civilian population.

“Tens of thousands of civilians are now known to have fled their homes; many have also lost their lives as a result of the shelling including women and children,” he reported. “We also have credible reports of severe shortages of medical supplies.

Despite the initial sense of optimism that accompanied the Mission’s establishment, three years ago tomorrow, “We find ourselves at a critical moment in Libya’s democratic transition: a faltering political process that has brought the country closer to the brink of protracted conflict and civil strife,” he said.

“In all my meetings, I warned of the dangers of creating parallel political institutions and processes, which can only contribute to further division and polarization,” explained Mr. León.

“I impressed upon my interlocutors the need to refrain from taking any action that would further exacerbate current divisions, and stressed that any solution to the current crisis would have to be negotiated within the framework of the current political legitimacy that emanated from the elections.”

He noted that he had no illusions regarding the difficulties and challenges ahead “but that he remained “a fervent supporter of the Libyan people’s desire to safeguard their country’s national unity and social fabric.” 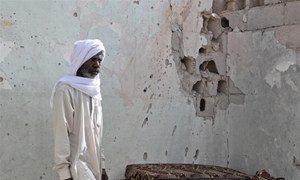 The violence in Libya must stop, the United Nations envoy to that country today reiterated, calling for “meaningful, effective” dialogue to end what is among the worst fighting the country has seen since leader Muammar al-Qadhafi was ousted in 2011.