The new United Nations human rights chief today urged the international community to stop the “increasingly conjoined” conflicts in Iraq and Syria, lashing out at the armed group Islamic State of Iraq and the Levant (ISIL) for trying to create a “house of blood.”

The UN High Commissioner for Human Rights referred to ISIL fighters as ‘Takfiris,” an ideology that he calls “extremely narrow and unyielding” who annihilate those Muslims, Christians, Jews and others – the rest of humanity – who believe differently to them.

“Do they believe they are acting courageously? Barbarically slaughtering captives? What virtue are they demonstrating exactly?” Zeid Ra'ad Al Hussein told the UN Human Rights Council in Geneva in his first address since taking up the four-year post on 1 September.

“They reveal only what a Takfiri state would look like, should this movement actually try to govern in the future,” he continued. “It would be a harsh, mean-spirited, house of blood, where no shade would be offered, nor shelter given, to any non-Takfiri in their midst.”

The ISIL has demonstrated “absolute and deliberate disregard for human rights,” Mr. Zeid said, calling the extent of the violence “unprecedented.”

He called on Iraq, led by new Prime Minister Haider al-Abadi, to join the Rome Statute of the International Criminal Court (ICC) to ensure accountability and public acknowledgment of the wrongs suffered.

“In particular, dedicated efforts are urgently needed to protect religious and ethnic groups, children – who are at risk of forcible recruitment and sexual violence – and women, who have been the targets of severe restrictions,” Mr. Zeid said.

The Israeli-Palestinian conflict is another example of the need to end persistent discrimination and impunity, the human rights chief said.

He noted that the recent armed conflict had a “particularly devastating” toll in terms of deaths, suffering and destruction, and compounded an already precarious situation due to the seven-year blockade by Israel.

At least 2,131 Palestinians and 71 Israelis were killed in the conflict, the majority of them civilians, Mr. Zeid said.

The human rights chief was addressing the opening of the 27th session of the Human Rights Council, which will run through 26 September. It will feature presentations of reports by 19 human rights experts on various themes and country situations, including the Central African Republic (CAR), South Sudan, Sudan, and Syria, and updates on the situations in Gaza, Iraq and Sri Lanka. 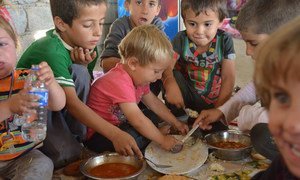 The United Nations World Food Programme (WFP) announced today that it has resumed delivering food assistance to an area of Iraq encompassing much of the western part of the country for the first time since May, targeting 76,000 people who are part of a “massive displacement” of families fleeing fighting.