Secretary-General Ban Ki-moon today hailed the vital contributions of New Zealand to the work of the United Nations, from peacekeeping and disarmament to gender equality and human rights, as he addressed students and faculty at the University of Auckland.

It was the second visit for the Secretary-General to the University, which bestowed on him today an honorary doctorate in recognition of the valuable work being carried out by the Organization.

In his lecture, Mr. Ban hailed New Zealand’s “ingenuity and hard work” for the UN, including the contribution of military and civilian personnel to its peacekeeping operations.

“This country has been a long and staunch champion of nuclear and conventional disarmament,” he went on to say, adding his hope that with New Zealand’s ratification of the Arms Trade Treaty, it will come into effect by the end of this year.

He also voiced appreciation for New Zealand’s contributions over the years to promoting security in Afghanistan, Timor-Leste, the Solomon Islands and Bougainville in Papua New Guinea.

New Zealand is also a pioneer on gender equality as the first country in the world where women received the right to vote, the Secretary-General noted, saying he admired this “far-sighted vision.”

The country, he continued, is a party to most of the core international human rights treaties, and its aid programme and assistance have been pivotal to helping countries in the Pacific region to develop.

On a personal note, the Secretary-General recalled a programme organized by the American Red Cross Society that he participated in while in high school that sponsored him to travel across the United States with other young people from more than three dozen countries.

“During that programme, Jocelyn Jones and Shirley Keen were representing New Zealand. We have met several times over the years, including three years ago when I was in Auckland. And I am happy that they are here with me today,” said Mr. Ban.

They also discussed New Zealand’s important role in the upcoming World Conference on Indigenous Peoples, to take place on the margins of the 69th General Assembly later this month, and exchanged views on developments in Ukraine, Iraq, the Middle East and South Sudan – subjects that the Secretary-General also discussed with Prime Minister John Key yesterday.

♦ Receive daily updates directly in your inbox - Subscribe here to a topic.
♦ Download the UN News app for your iOS or Android devices.
New Zealand 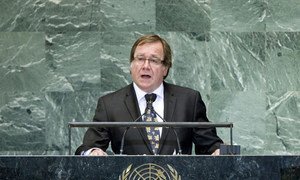 New Zealand today called on the five permanent members of the United Nations Security Council to give up their veto rights on issues involving mass atrocities, saying their inability to act in Syria was depriving them of credibility in the eyes of fair-minded people.