29 September 2012
New Zealand today called on the five permanent members of the United Nations Security Council to give up their veto rights on issues involving mass atrocities, saying their inability to act in Syria was depriving them of credibility in the eyes of fair-minded people.

“If 25,000 deaths, countless thousands injured and many more thousands displaced and homeless is not enough to get the Security Council to act, then what does it take?” New Zealand’s Foreign Minister, Murray McCully, asked the 67th General Assembly on the fifth day of its high-level debate, at UN Headquarters in New York.

“It would be difficult for me to overstate the level of frustration of the people I represent with the complete inability of the United Nations Security Council to act in relation to Syria,” he said, with regard to the humanitarian toll in Syria since the uprising against President Bashar al-Assad erupted 18 months ago.

“And it would be even more difficult to overstate the extent to which the Security Council is at risk of losing its credibility in the eyes of reasonable and fair minded people through its inability to act,” he added, referring to the failure – through the use of veto powers – of the 15-member body to reach agreement on a united course of action on the crisis in the Middle Eastern country.

Mr. McCully welcomed the leadership the Arab League had shown on the issue and suggested that in the absence of leadership from the Council, the Assembly will need to find ways to play a more activist role. “But from all this, the case for reform of the Security Council has become utterly compelling,” he noted.

“There are now compelling reasons for us to ask the P5 to voluntarily accept restrictions of the use of veto,” he said, referring to the five permanent states – China, France, Russia, United Kingdom and United States – which have the veto right. “To go further and seek its abolition is pointless – it simply will not happen.”

He called on the five to use their veto only when their vital national interests are at stake – the argument they used when they insisted on being granted the right at the UN’s creation in 1945.

“My challenge to them today is to consider a process by which they collectively and voluntarily agree to confine their use of the veto to those issues that clearly and directly affect their vital national interests, and that they voluntarily agree not to use their veto in situations involving mass atrocities.” Mr. McCully stated.

He also called on the Council to agree to the request from the Economic Community of West Africa (ECOWAS) to endorse action by it to confront the situation in Mali, where Islamic militants have seized control of the north and imposed strict Sharia law, leading to an exodus of some 260,000 refugees.

Turning to PIF regional issues, Mr. McCully noted that there was more the UN and particularly the Security Council can do to support regional leadership on peace and security matters, citing the major role the oceans and their resources play in the lives of the small island states.

“For many of the poorer states within our region, their fisheries resources is the major economic asset they hold,” he said. “Yet due to illegal fishing practices, unreported catch and inadequate management regimes, these countries have received far too small a return on the resources.”

Echoing New Zealand’s concern from the Caribbean, on the opposite side of the world, Foreign Minister Frederick Mitchell of The Bahamas underscored the vital importance the seas and their resources hold for his country.

He noted that the Bahamas has initiated actions to preserve its fish stocks by introducing penalties for over-fishing and banning long line fishing, establishing a shark sanctuary and expanding marine protection areas.

“For The Bahamas it is imperative that these sustainable development strategies are complemented with appropriate actions taken by the international community,” he said.

Among other topics covered in his speech to the General Assembly, the Bahamian Foreign Minister also addressed the issue of Security Council reform, expressing the hope that negotiations on the matter during Assembly’s current session will result in “tangible progress aimed at making the Council all that it can and should be.”

“A representative, transparent, responsive, accountable, democratic and inclusive Security Council, predicatd on an increased membership in both the permanent and non-permanent categories, as well as modification of its working methods, is overdue,” Mr. Mitchell said.

The two Foreign Ministers are among scores of world leaders and other high-level officials presenting their views and comments on issues of individual, national and international relevance at the Assembly’s General Debate, which ends on 1 October. 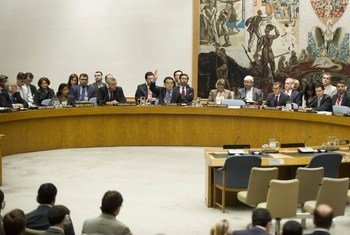 19 July 2012
Despite the appeals for united and concerted action to help end the escalating violence in Syria, the Security Council today failed to adopt a resolution that would have threatened sanctions on Damascus, owing to the negative votes of permanent members Russia and China.