The Independent International Commission of Inquiry on Syria emphasized that with the continuous influx of foreign fighters and the success of extremist groups, “risks of the conflict spreading further are palpable.”

The Commission’s latest report, based on 480 interviews and a wealth of documentary material, chronicles the human cost of the Syrian conflict that began in March 2011. The impact has been particularly grave for women and children, whose most basic rights are being violated every day.

“Hundreds of civilians are dying each day as the fighting goes on with no regard to law or to conscience,” said Paulo Pinheiro, Chair of the Commission.

Women have been lashed for not abiding by the dress code decreed by the group known as the Islamic State of Iraq and Syria (ISIS), according to a news release on the Commission’s report. In Ar-Raqqah, children as young as 10 are being recruited and trained at ISIS camps. The group has also forcibly displaced Kurdish communities in northern Syria. Journalists and other media workers are systematically targeted.

In areas of Syria under the control of ISIS, particularly in the north and north-east of the country, Fridays are regularly marked by executions, amputations and lashings in public squares, the report states. Civilians, including children, are urged to watch. Bodies of those killed are placed on display for several days, terrorizing the local population.

The Commission reported that “members of ISIS have committed war crimes and crimes against humanity in Aleppo and Ar-Raqqah governorates including acts of torture, murder, enforced disappearances and forcible displacement.”

The report stated that the Government also commits violations, including war crimes and crimes against humanity, with impunity. Between January and July, hundreds of men, women and children were killed every week by the Government’s indiscriminate firing of missiles and barrel bombs into civilian-inhabited areas. In some instances, there is clear evidence that civilian gatherings were deliberately targeted, constituting massacres, as detailed in the report.

The Commission reported that Government soldiers at checkpoints prevented injured civilians from reaching hospitals. Hospitals in restive areas continue to be targeted and Government forces refused to allow aid deliveries of essential medicines and surgical supplies. Humanitarian aid continued to be obstructed as a weapon of war.

Meanwhile, in Government prisons, detainees were subjected to horrific torture and sexual assault. The methods employed and conditions of detention support the Commission’s long-standing findings of systematic torture and mass deaths of detainees.

In April and May, Government forces used chemical agents, likely chlorine, in eight separate incidents in western Syria, the Commission found. Children are increasingly recruited by non-State armed groups and by the Government’s Popular Committees to participate in hostilities. The breakdown of family and community networks, often due to the death or disappearance of men, has left women and girls vulnerable and primarily responsible for the care of their families.

“The international community’s failure in its most elemental duties – to protect civilians, halt and prevent atrocities and create a path toward accountability – has been matched on the ground by an abandonment of even the pretence of an adherence to norms of international law. As can be seen today, this has grave implications for the entire region,” the report added. 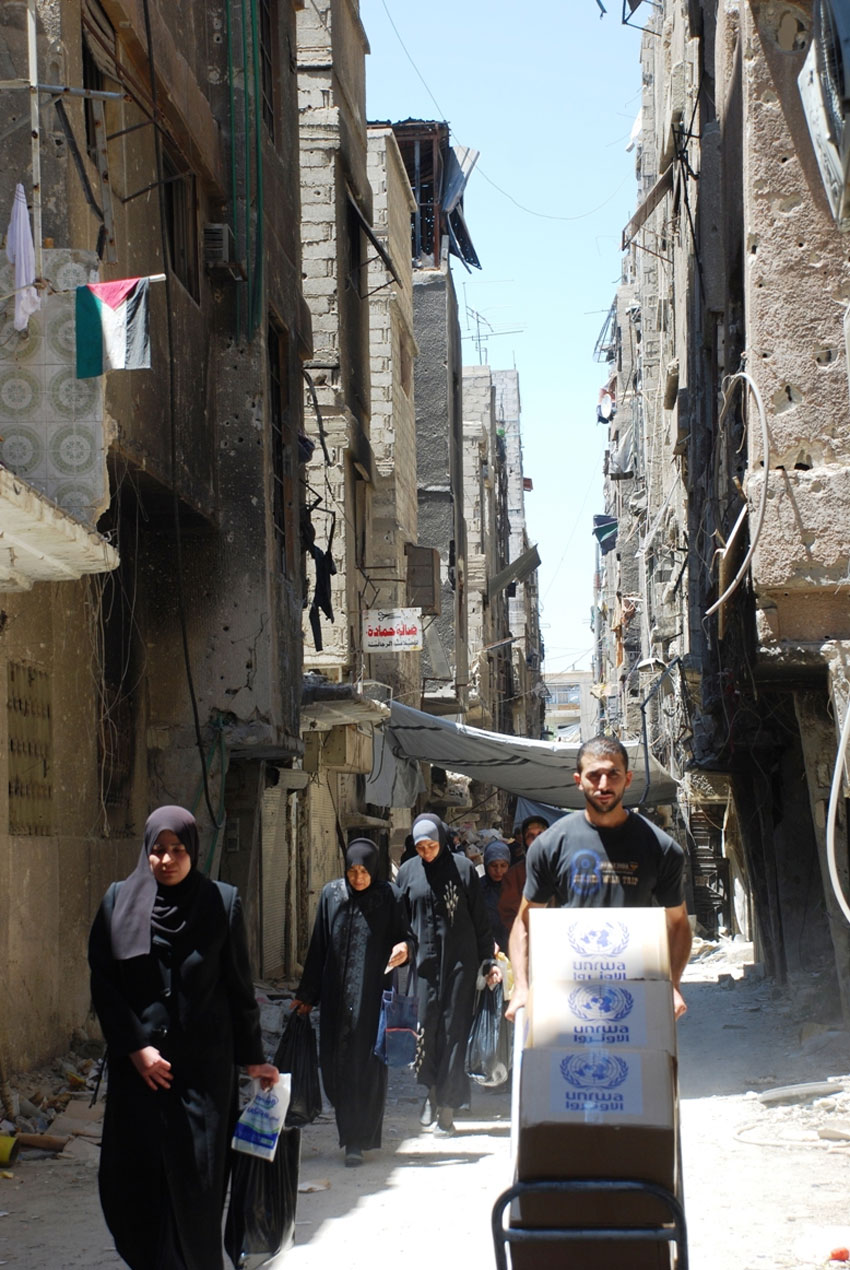 The UNRWA team resumed distribution in Yarmouk camp on 16 and 17 July after a break of two days. Food parcels, hygiene kits, vitamin packs, rehydration salts and various other food items were distributed to hundreds of families.Photo: UNRWA Archives

Several States continue to deliver mass shipments of arms, artillery and aircraft to the Syrian Government, or contribute with logistical and strategic assistance. Meanwhile, other States, organizations and individuals support armed groups with weapons and financial support. The weapons they transfer to the warring parties in Syria are used in the perpetration of war crimes. The Commission is recommending the imposition of an arms embargo and called on the international community to curb the proliferation and supply of weapons.

“Accountability must be part of any future settlement if it is to result in an enduring peace. Too many lives have been lost and shattered,” stated Mr. Pinheiro.

This report marks the third anniversary of the establishment of the Commission of Inquiry on Syria. In addition to Mr. Pinheiro, the Commission comprises Karen Koning AbuZayd, Carla del Ponte and Vitit Muntarbhorn. It has been mandated by the UN Human Rights Council to investigate and record all violations of international human rights law, war crimes and crimes against humanity since the start of the conflict.

Reacting to reports that a Russian aid convoy crossed the Ukrainian border without Kiev’s permission, United Nations Secretary-General Ban Ki-moon today urged all sides to continue to work together to ensure that humanitarian supplies reach those most in need.