A United Nations official for Nigeria today said that restoring the dignity and integrity of returning schoolgirls kidnapped by Boko Haram militants in Chibok is instrumental in reintegrating the girls back into a “safe space” in society.

“The UN family has not forgotten the girls,” said Rati Ndhlovu, the representative of the UN Population Fund (UNFPA) in Nigeria at a Headquarters press conference.

Some 200 girls were abducted by Boko Haram militants as they attended school on 14 April. Despite efforts by the Nigerian Government and international outcry, most of the girls remain missing, while some who have managed to flee their perpetrators have been raped by lone men they meet on their way home.

Calling it a “double tragedy,” Ms. Ndhlovu stressed that the issue of sexual violence is very serious because the girls are threatened both by insurgents and by other men who will take advantage of a vulnerable situation.

According to media reports, the Boko Haram insurgency continues to expand in size, kidnapping villagers and forcing them to join them in fighting. Ms. Ndhlovu said that most of the men and boys in Chibok have been forced to join the insurgency. Most of the health clinics have shut down while health workers have fled the violence. A displacement crisis persists as those who are fleeing the violence do not always want to go into the camps and other places people congregate because they fear insurgent attacks.

In the meantime, UNFPA, along with the World Health Organization (WHO) and the United Nations Children’s Fund (UNICEF), is preparing for any and all returning girls by setting up clinics and providing health screening for any girls coming back.

UNFPA has distributed much-needed essentials including “dignity kits” that include sanitarian napkins. “The girls are running from home and they have no menstruation pads and have nothing to use. They need water. The need the basic things that keep a woman dignified,” said Ms. Ndhlovu.

They are mainstreaming family planning into the humanitarian response by educating the girls about healthy timing of pregnancies. The girls are asked to question becoming pregnant during times of insecurity, Ms. Ndhlovu said, adding that “it may not the best time to be pregnant when you can hardly sleep in your house, when you are running all the time.”

With most health clinics closed and a shortage of health workers, the UN and its partners are leading and supporting coordination efforts to ensure synergies around interventions. In that regard, the UN is working with local NGOs and engaging the Red Cross on logistical matters.

Meanwhile, traditional religious leaders are being trained on how they are going to work with their communities to address certain challenges. Programmes are aimed at changing attitudes so that the returning girls are not stigmatized and shunned. Meanwhile the girls have participated in psychosocial programmes.

Another session was held for men and boys of the communities to involve them in creating a safe space for the girls to return to. Men and boys discussed ways to ensure that girls are not abused and that when they come back they are accepted. A separate group of men is championing for the rights of the girl-child in terms of education and health.

“These boys will grow up with a different understating on how to deal with girls and a greater understanding and appreciation for their rights,” Ms. Ndhlovu said. 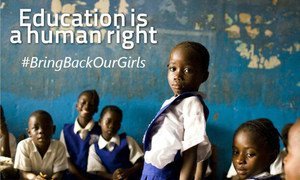 United Nations Special Envoy for Global Education Gordon Brown today called for the world to show support for the kidnapped schoolgirls of Chibok, Nigeria, on 22 July, which will be the 100th day of their captivity.