With the latest ceasefire in Gaza holding, United Nations humanitarian partners are delivering life-saving aid and surveying damaged areas to figure out what is urgently needed on the ground.

At UN Headquarters, the Secretary-General’s spokesperson, Stéphane Dujarric, told reporters that safe and secure transportation in the Gaza Strip during the ceasefire will enhance the delivery of relief supplies and allow for the repair of critical water, sanitation networks and electricity infrastructure.

The previous ceasefire, which expired Wednesday, has been extended for another five days until midnight, 18 August while negotiations in Cairo towards a long-term cessation of hostilities continue.

The halt in fighting will also allow for the removal of unexploded ordnance, Mr. Dujarric said. According to the OCHA, thousands of those explosive remnants of war (ERW) remain dispersed throughout. Yesterday, six people were killed and six others injured when unexploded ordnance in Beit Lahia detonated.

The ceasefire is also allowing the UN Relief and Works Agency (UNRWA) to distribute maternity packages to mothers who have given birth during the current hostilities, and who are registered as displaced people in its shelters across Gaza. A total of 344 babies have been born in UNRWA schools designated as shelters. Those packages contain essential items to help mothers care for their newborns while they stay in temporary shelters.

"Up to now, ongoing military operations have prevented detailed assessments of damages to agriculture from being completed," said Ciro Fiorillo, head of FAO's office in the region.

"Under the most recent ceasefire, many farmers and herders are now able to access their lands, however resumption of food production faces serious obstacles given the damages sustained and shortages of water, electricity, inputs and financial resources, as well as ongoing uncertainty regarding the possible resumption of military activities," said Mr. Fiorillo.

Additionally, the FAO and World Food Programme (WFP) report that Gaza lost half of its poultry birds either due to direct hits on their shelters or lack of water, feed or care. Fishing sector losses so far are estimated at 234.6 tonnes – equivalent to 9.3 percent of local fishers' yearly catch. 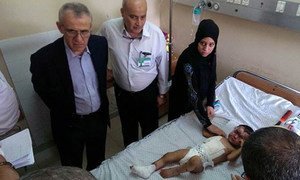 Hospitals and health facilities in Gaza are in dire need of support from the international donor community, a senior representative of the United Nations health agency today said following a visit to the Gaza Strip and Ramallah to survey the infrastructure there.