Arms race in Syria must be stopped to reduce civilian suffering, says head of UN panel

Speaking to UN Radio ahead of an informal gathering with members of the Security Council, the Chair of the Independent International Commission of Inquiry on Syria underscored that there is no military solution to the conflict and echoed Secretary-General Ban Ki-moon’s calls for an arms embargo on the country.

“This arms race must be stopped,” said Paulo Sérgio Pinheiro. “We would like very much that the different Member States will interrupt their support in terms of weapons, of arms, for both sides.”

He said that bombardment of civilian populations by the Syrian air force and non-State armed groups continues, along with shelling of civilians and torture.

“We continue to have full-fledged impunity in Syria,” Mr. Pinheiro said. “All parties are committing these horrendous violations and nobody is answering to what is required.”

He noted that it is ultimately up to the Security Council to refer Syria to the International Criminal Court (ICC) or to establish a special tribunal, but so far little action has been taken.

“We are teaching that accountability is completely absent in this conflict,” noted Mr. Pinheiro. He added that the Commission continues to document data and collect evidence which will one day be used for accountability, “but this conflict is already in its fourth year and this impunity continues unabated.”

He also reminded the parties that they are obliged to respect the Geneva conventions and human rights treaties.

“And we will continue to repeat to the Council that victory is an illusion, there is no military solution, only a negotiated settlement,” he underscored.

Established by the UN Human Rights Council in August 2011, the Commission also includes experts Karen Koning Abuzayd, Carla del Ponte and Vitit Muntarbhorn. It has been mandated to investigate and record all violations of international human rights law during the Syria conflict.

Speaking to reporters after the briefing, Ms. Abuzayd confirmed that the Commission has four lists of suspected perpetrators, which include individuals, such as those who command airports from which bombings take place and detention centres. Names of foreign fighters are also listed even though the groups are fragmented and do not have formal command chains.

The Commission is expected to present its latest report to the Human Rights Council on 17 September. 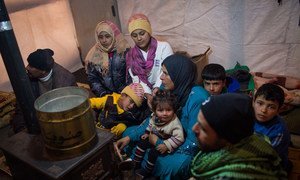 In response to the deteriorating humanitarian situation in Syria, the Security Council today adopted a resolution aimed at increasing access to civilians in difficult-to-reach areas by authorizing the delivery of assistance across borders and conflict lines.