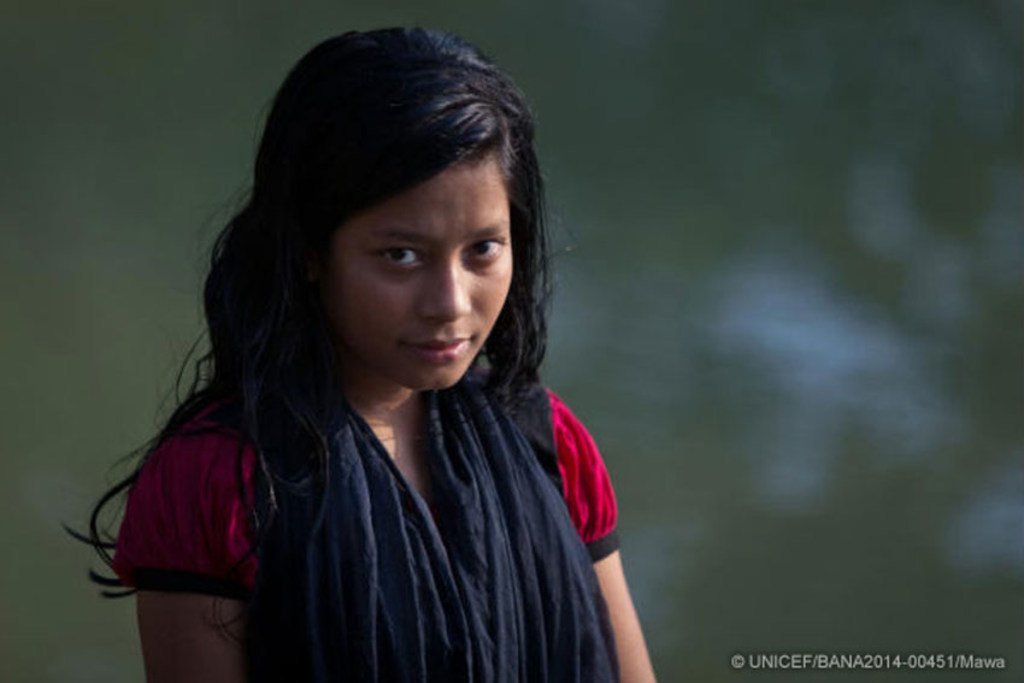 UNICEF/BANA2014-00451/MAWA
Kalpona was 12 when her parents arranged for her to marry a man more than twice her age. A few days before the wedding, they agreed to let her continue with school instead.
22 July 2014
Women

According to the newly-released data, more than 130 million girls and women have experienced some form of female genital mutilation, also known as FGM, in the 29 countries in Africa and the Middle East where the harmful practice is most common.

In addition, child marriage is widespread, the agency pointed out in a news release. More than 700 million women alive today were married as children. More than 1 in 3 – or some 250 million – were married before the age of 15.

“The numbers tell us we must accelerate our efforts. And let’s not forget that these numbers represent real lives. While these are problems of a global scale, the solutions must be local, driven by communities, families and girls themselves to change mindsets and break the cycles that perpetuate FGM/C and child marriage,” said UNICEF Executive Director Anthony Lake.

“We can’t let the staggering numbers numb us – they must compel us to act.” 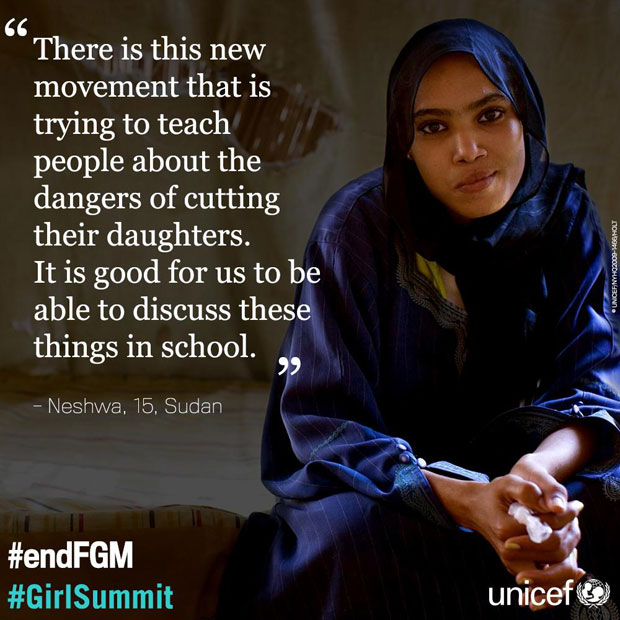 Neshwa, 15, is one of millions of girls around the world to have been subjected to female genital mutilation (FGM). She hopes to become a doctor. Let girls be girls: http://uni.cf/GS14 #GirlSummit. Credits: UNICEF/NYHQ2009-1466/HOLT 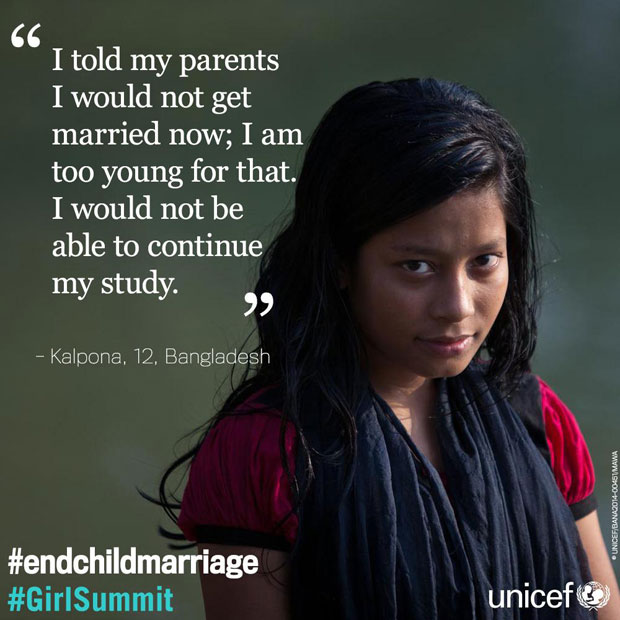 In Bangladesh, 65% of girls are married as children. Pledge your support for ending child marriage within a generation: http://uni.cf/GS14. Credits: UNICEF/BANA2014-00451/MAWA 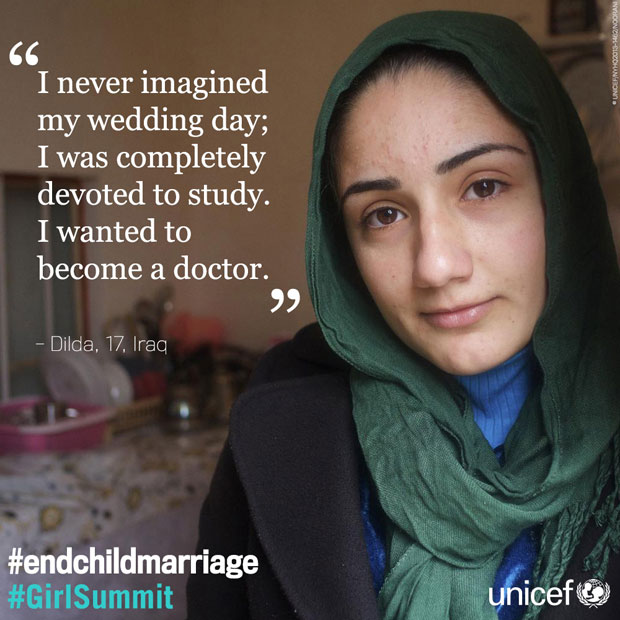 Like many girls facing poverty or conflict, Dilda was married to an older man to help make ends meet. “She had a nice dress, but no songs, no party,” says her father Abdul. “It would be very improper to have a party while our brothers and sisters are suffering and being killed in Syria.” Credits: UNICEF/NYHQ2013-1462/NDORANI 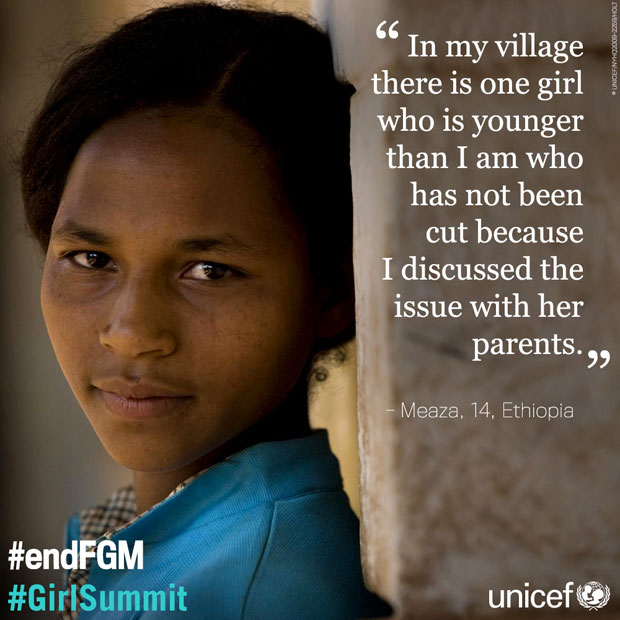 Meaza was 10 when she was subjected to female genital mutilation (FGM). She now campaigns to protect other girls from this harmful practice. FGM is declining in Ethiopia and many countries around the world, but still too many girls are at risk. We must do more. Credits: UNICEF/NYHQ2009-2259/HOLT 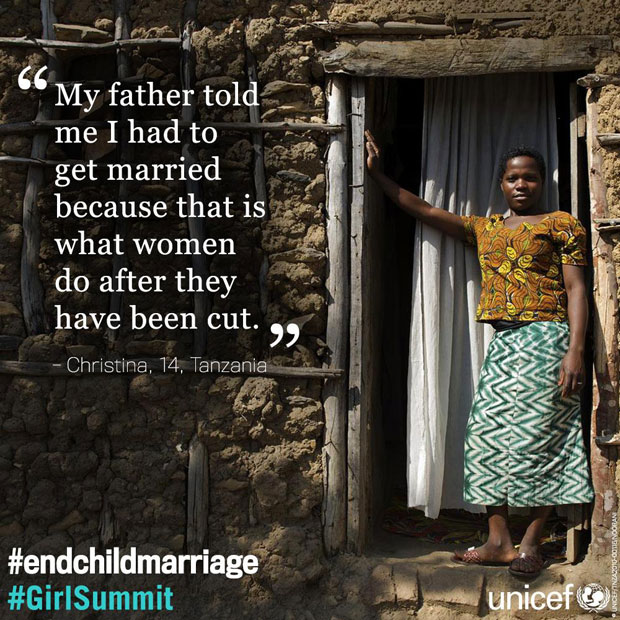 Christina, from Tanzania, was married to an older man when she was 13 after suffering female genital mutilation (FGM). Credits: UNICEF/TNZA2010-00116/NDORANI

The new data was released in conjunction with the first-ever Girl Summit, co-hosted in London by UNICEF and the Government of the United Kingdom, to rally support for faster progress to end child marriage and FGM.

Female genital mutilation/cutting refers to a number of practices which involve cutting away part or all of a girl’s external genitalia. The practice has no health benefits, causes severe pain and has several immediate and long-term health consequences, including prolonged bleeding, infection, infertility and death, according to the UN.

Meanwhile, child marriage can lead to a lifetime of disadvantage and deprivation, noted UNICEF. Girls who marry before they turn 18 are less likely to remain in school and more likely to experience domestic violence. Young teenage girls are more likely to die due to complications in pregnancy and childbirth than women in their 20s; their infants are more likely to be stillborn or die in the first month of life.

“FGM and child marriage profoundly and permanently harm girls, denying them their right to make their own decisions and to reach their full potential. They are detriments to the girls themselves, their families, and their societies,” said Mr. Lake.

“Girls are not property; they have the right to determine their destiny. When they do so, everyone benefits.”

♦ Receive daily updates directly in your inbox - Subscribe here to a topic.
♦ Download the UN News app for your iOS or Android devices.
genital mutilation|Children 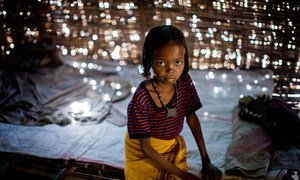