UNICEF/Kate Holt
At age one, Fatima was subjected to female genital mutilation/cutting (FGM/C) in her village in Afar Region of Ethiopia which has one of the world’s highest prevalence rates.

6 February 2014
United Nations officials today called for a complete end to genital mutilation/cutting (FGM/C) to ensure the dignity, health and well-being of every girl, noting that despite a century of efforts, millions of girls worldwide are still threatened by the horrible practice.

In the 29 countries in Africa and the Middle East where the practice is concentrated, more than 125 million girls and women have been cut, according to the UN Population Fund (UNFPA). The agency projects that a further 86 million young girls worldwide are likely to experience some form of the practice by 2030, if current trends continue.

“It is unacceptable that these human rights violations continue to threaten the lives and futures of so many women and girls,” UNFPA Executive Director Babatunde Osotimehin said in a statement to mark the International Day of Zero Tolerance for Female Genital Mutilation.

“It is an affront to their human dignity, an assault on their health and an impediment to the well-being of their families, communities and countries. Human development cannot be fully achieved as long as women and girls continue to suffer from this human rights violation or live in fear of it,” he stated.

Dr. Osotimehin noted that there have been successes in accelerating the abandonment of FGM/C – which refers to a number of practices which involve cutting away part or all of a girl’s external genitalia – in some communities and countries. For example, Uganda, Kenya and Guinea-Bissau have recently adopted laws criminalizing the practice.

In Ethiopia, a traditional cutter and the parents of six girls were penalized in a highly publicized case that helped raise awareness about the issue. A number of other countries have adopted culturally sensitive programmes aimed at changing social norms, often by engaging community elders, men and boys.

“But the challenge of eliminating female genital mutilation/cutting everywhere remains enormous and we must step up our efforts,” the Executive Director stressed.

“In the 21st century, no woman or girl should suffer or die due to FGM/C. Addressing the persistent inequalities that negatively affect women’s and girl’s health and well-being is our unfinished business.”

Secretary-General Ban Ki-moon, in his message for the Day, highlighted the need to “strive to preserve the best in any culture, and leave harm behind,” in a reference to this year’s theme for the Day. There is no developmental, religious or health reason to cut or mutilate any girl or woman, he noted.

“Although some would argue that this is a ‘tradition’, we must recall that slavery, so-called honour killings and other inhumane practices have been defended with the same weak argument,” he said. “Just because a harmful practice has long existed does not justify its continuation. All ‘traditions’ that demean, dehumanize and injure are human rights violations that must be actively opposed until they are ended.”

He pointed to “positive signs of progress” in the global push to end this harmful practice. Girls themselves instinctively understand the dangers of being cut, and many mothers who have seen or experienced the trauma want to shield their daughters from suffering. It is encouraging, he said, that an increasing number of communities are coming together and agreeing publically to end female genital mutilation and ensure a better life for their girls.

The UN and its partners, Mr. Ban added, are engaged in valuable, culturally-sensitive activities that aim to stop female genital mutilation without scolding or shame. In addition to prevention, the UN is working with partners to help those who have been affected by FGM.

He recalled that the General Assembly’s landmark resolution proclaiming the Day was sponsored by every country in Africa and embraced by the entire membership of the UN.

“Now our challenge is to give real meaning to this Day by using it to generate public support, trigger legal and practical advances, and help girls and women at risk of or affected by female genital mutilation,” he said. “The effect on individuals will be profound, sparing them pain and spurring their success. The benefits will reverberate across society as these girls and women thrive and contribute to a better future for all.”

The President of the General Assembly, John Ashe, used his message for the Day to call on governments, civil society organizations, religious leaders and community groups to work together to encourage progress towards change and to promote an end to a practice that harms so many girls and women.

“As with all deeply-entrenched practices, achieving the end of FGM will take action at every societal level. Condemnation and laws and policies banning the practice are important, but will not be enough,” he said.

“The need for governments, religious leaders, health workers, countries hosting practicing migrant communities, and grass roots organizations to join forces to end FGM in one generation is now more urgent than ever.” 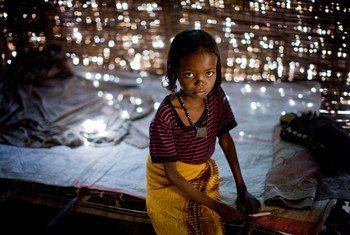 22 July 2013
While the majority of people in countries where female genital mutilation/cutting (FGM/C) is concentrated oppose this harmful practice, there are still 30 million girls at risk of being cut in the next decade, according to a report launched today by the United Nations Children’s Fund (UNICEF).