UN Photo/Loey Felipe
The UN Security Council holds a moment of silence in honour of the victims of crashed flight MH17. 18 July 2014.
18 July 2014

The apparent deliberate downing of a Malaysian passenger plane over eastern Ukraine highlights the need for an urgent resumption of a ceasefire and a serious effort to end the ongoing crisis, the United Nations political chief told an emergency meeting of the Security Council today.

Malaysia Airlines flight MH17, carrying 298 people, was en route from Amsterdam to Kuala Lumpur when it crashed on Thursday in eastern Ukraine, near the Russian border.

Under-Secretary-General for Political Affairs Jeffrey Feltman said that while the UN has at this point no independent verification of the circumstances regarding the tragic crash, Secretary-General Ban Ki-moon is alarmed at what seem to be “credible, numerous reports” that suggest that a sophisticated surface-to-air missile was used.

“The Secretary-General strongly condemns this apparently deliberate downing of a civilian aircraft,” said Mr. Feltman. “This horrifying incident serves as the starkest reminder of how dire the situation in eastern Ukraine has become – and how it affects countries and families well beyond Ukraine's borders.”

A separate statement issued by Mr. Ban's spokesperson said that “this horrifying incident must at the very least prompt a serious and sustained effort to end the fighting in Ukraine.” It also stressed the need for accountability for the tragedy.

Both the Secretary-General and the Security Council have called for an international investigation into the incident. The Council, in a press statement, also stressed the need for all parties to grant immediate access by investigators to the crash site.

Mr. Feltman said the UN is fully ready to cooperate, and it has been in touch with the UN International Civil Aviation Organization (ICAO), which has offered to Ukrainian officials its investigative capacity in order to put together an international team.

Among the casualties of the crash was a staff member of the World Health Organization (WHO), Glenn Thomas, who was on his way to an international AIDS conference in Australia. The Joint UN Programme on HIV/AIDS (UNAIDS) said in a statement that a number of other passengers on the flight were also on their way to participate in the conference. 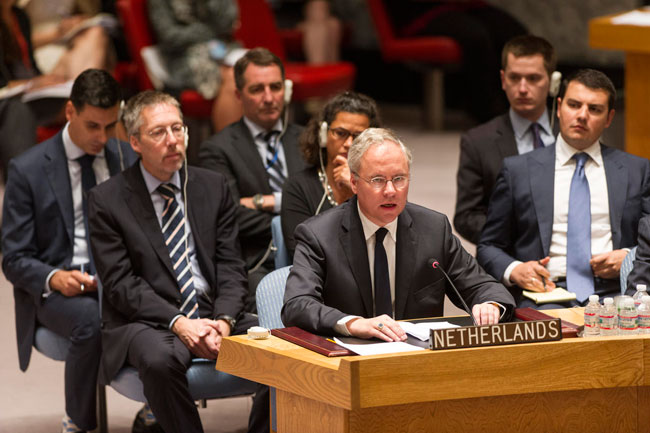 Representative of the Netherlands addresses the Security Council emergency meeting on the situation in Ukraine. UN Photo/Loey Felipe 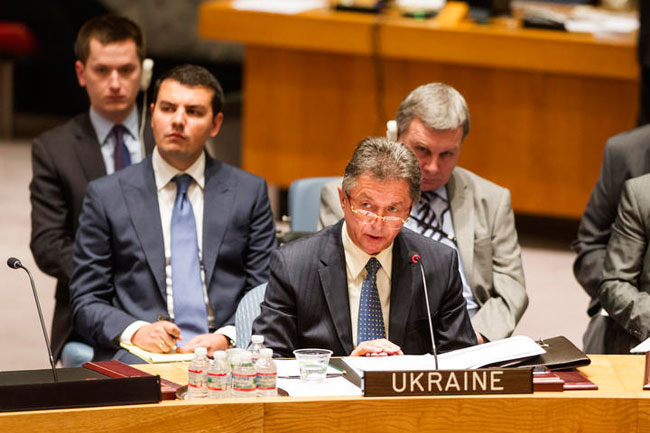 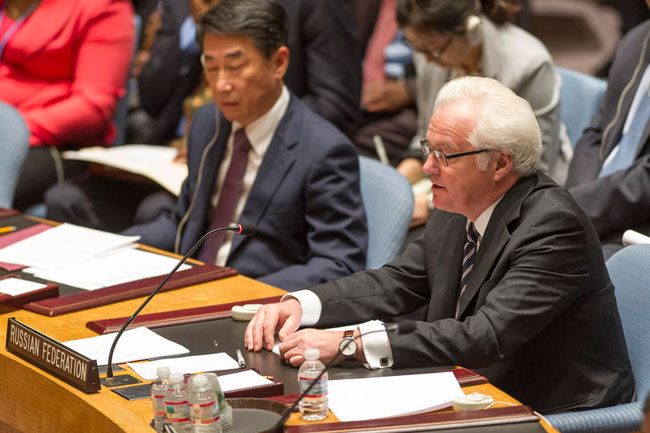 Vitaly I. Churkin, Permanent Representative of the Russian Federation addresses the Security Council emergency meeting on the situation in Ukraine. UN Photo/Loey Felipe 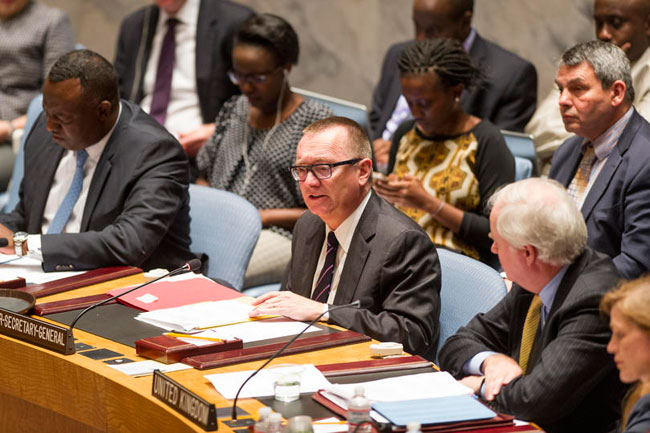 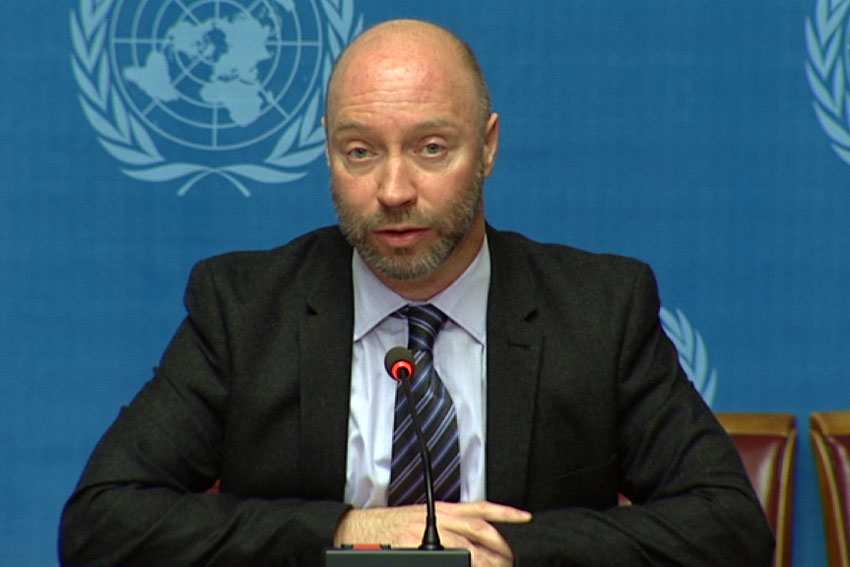 Glenn Thomas, Spokesperson for the World Health Organization (WHO), was among the casualties of the crash. Photo: UN Multimedia

“The UNAIDS family is in deep shock. Our hearts go out to the families of all the victims of this tragic crash,” said Executive Director Michel Sidibé. “The deaths of so many committed people working against HIV will be a great loss for the AIDS response.”

On the Ukraine crisis, Mr. Feltman reported that following the 30 June announcement by President Petro Poroshenko of the end of the 10-day ceasefire and subsequent resumption of the security and law enforcement operation in the east, the fighting between Government forces and armed groups has intensified dangerously, resulting in numerous deaths.

According to the Ukrainian authorities, a number of towns, including notably the cities of Sloviansk and Kramatorsk, as well as various smaller villages in the Donetsk and Lugansk regions, have been returned to their control.

However, Mr. Feltman said, relentless fighting has continued particularly in and around the cities of Lugansk and Donetsk, where the armed groups appear to have consolidated their presence. Earlier this week, a fierce battle was also fought over the international airport in Lugansk that now appears under the Ukrainian Government's control.

The situation on and around the border between Ukraine and Russia is of “particular concern,” he said, noting that, while it is impossible for the UN to independently verify these accounts, a number of fatal incidents as well as intense fighting have been reported in recent days.

“As the Secretary-General has reiterated on countless occasions, armed groups need to immediately disarm and stop engaging in unlawful and violent acts,” the official stated.

“At the same time, we continue to strongly urge the Ukrainian authorities to act with maximum restraint and to make every effort possible to ensure the protection of civilians caught in the fighting.”

While estimations of the total number of civilian casualties vary, the UN human rights office reports there have been approximately 500 casualties so far and 1,400 people injured. Also, the UN refugee agency estimates that the crisis has displaced some tens of thousands of people.

“Grievances can and must never justify endangering the lives of those one claims and aims to represent and protect,” Mr. Feltman stated. “As the fighting continues, we are, however, disconcerted by the apparent lack of tangible progress toward a political solution.

“A first, critical step would be the immediate resumption of a ceasefire,” he stated.

“Establishing a path to peace in Ukraine, as in areas of conflict elsewhere in the world, requires a concerted effort by national actors from across the political spectrum, backed by strong and unified support of the international community,” said Mr. Feltman, who is expected to return to Kiev and Moscow in the coming days in the spirit of the Secretary-General's good offices.

United Nations Secretary-General Ban Ki-moon expressed his condolences following today’s crash of a Malaysia Airlines plane in Ukraine, and called for a full investigation into the disaster.