UNHCR/A.McConnell
Lina has not heard from her husband since he was detained in Syria two years ago. Now a refugee in Lebanon, she lives in a tented settlement with her seven children.
8 July 2014

One in four of all Syrian refugee families in Egypt, Lebanon, Iraq and Jordan are headed by women who, on their own, are struggling to make ends meet and take care of their increasingly traumatized families, the United Nations today reported, calling for more resources to aid these single mothers.

“For hundreds of thousands of women, escaping their ruined homeland was only the first step in a journey of grinding hardship,” said António Guterres, UN High Commissioner for Refugees, whose office compiled the report, Woman Alone: The Fight for Survival by Syria’s Refugee Women.

“It’s shameful,” Mr. Guterres added. “They are being humiliated for losing everything.”

Forced to take responsibility for their families after their partners were killed, captured or otherwise separated, the women are caught in a “spiral of hardship, isolation and anxiety,” according to the authors. More than 145,000 Syrian refugee families are headed by women in those countries.

“Syrian refugee women are the glue holding together a broken society,” said Angelina Jolie, UNHCR’s Special Envoy. “Their strength is extraordinary, but they are struggling alone. Their voices are an appeal for help and protection which cannot be ignored.”

The report, based on the personal testimony of 135 women interviewed over three months in early 2014, found that 60 per cent of the women expressed feeling insecure, and one in three said they were too scared or overwhelmed to even leave their home.

Nuha came to Cairo with her husband, but he was shot and killed while at work. “I don’t want to leave the house because of the sadness in my heart,” she told UNHCR. “We left death in Syria only to find it waiting for us here in Egypt.”

Many women complained of regular verbal harassment – by taxi drivers, bus drivers, landlords, and service providers, as well as men in shops, at the market, on public transport and even at aid distributions.

“I was living in dignity, but now no one respects me because I’m not with a man,” said Zahwa, who added that she was even harassed by refugees when collecting food coupons in Jordan.

The harassment includes sexual and gender-based violence, and their children face mounting trauma and distress, according to the report.

The top difficulty reported by the women is financial. As the sole breadwinners, most of the women are struggling to pay rent, and selling anything of value, including their wedding rings.

Only one-fifth of the women have paying jobs, UNHCR found. Twenty per cent of the women reported support from relatives. Others said they relied on charity, such as staying for free in a mosque.

Of the women interviewed, one-quarter received cash assistance from the UNHCR or other aid agency, with the majority of these women entirely dependent on the aid.

This assistance is falling short of what is needed, the UN agency reported, calling “on donors to do more to help Syrian refugee women get back on their feet and earn enough money to live.”

UNHCR also noted legal barriers from visa and other restrictions separating families from their husbands.

There are currently 2.9 million Syrian refugees registered in the region, with numbers growing at a rate of 100,000 people every month, according to UNHCR. If trends continue, the total number of refugees is expected to reach 3.6 million by the end of the year. 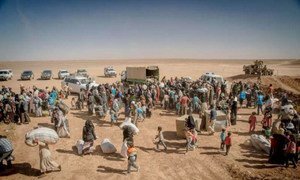 Failure to close the funding gap to meet the needs of the growing number of people fleeing the conflict in Syria could mean grave risks for the refugees as well as for the stability of the region, according to the United Nations refugee agency.