UNHCR/N.Dovga
An internally displaced woman folds clothes at a sanatorium in Ukraine that has been welcoming people from Crimea.
27 June 2014

Some 16,400 people fled their homes in crisis-riven eastern Ukraine during the past week, bringing the number of displaced within the country to 54,000, according the United Nations Refugee Agency (UNHCR).

Some 16,400 people fled their homes in crisis-riven eastern Ukraine during the past week, bringing the number of displaced within the country to 54,000, according the United Nations Refugee Agency (UNHCR).

“Many cite a deteriorating situation and fear of abduction for the sharp rise in displacement,” said UNHCR spokeswoman Melissa Fleming, adding “Increases were also being seen in the numbers of Ukrainians in Russia and other countries, although so far only a small number had applied for refugee status.”

Since the start of 2014, approximately 110,000 Ukrainians had arrived in Russia – with only 9,600 requesting asylum – while more than 700 others went to Poland, Belarus, Czech Republic and Romania.

"Most people are seeking other forms of legal stay, often we are told because of concerns about complications or reprisals in case of return to Ukraine," Ms. Fleming explained, as she briefed reporters in Geneva

Over the past few days, arrivals clustered mainly in Rostov-On-Don and Byransk. In Rostov, 12,900 people – including 5,000 children – were being accommodated in public buildings and tented camps. In Bryansk, the majority were staying with relatives and friends. UNHCR was also seeing unconfirmed reports of other recent arrivals in Russia from eastern regions of Ukraine and Crimea.

The acute rise in numbers over the past week coincided with the recent deterioration of the situation in eastern Ukraine. Displaced people cited worsening law and order, human rights violations and the disruption of State services are among the complex myriad of reasons for the poulation flows.

“Some reported they had lost their livelihoods and feared they would be unable to continue working with Ukrainian professional licences while others feared being forced to acquire Russian citizenship. And some said they had received personal threats on account of their political opinion or ethnic or linguistic background,” Ms. Fleming elaborated.

Unable to verify all information on displacement, UNHCR has had to rely on local and central authorities; partners; and civil society organizations.

“Insecurity in some areas of Ukraine was hampering access to many areas where displaced people were located,” stressed Ms. Fleming.

Ms. Fleming noted, “Most people were provided with temporary shelter and assistance from local authorities, non-governmental organization and donations of private citizens. UNHCR began distributing humanitarian assistance to those displaced in the East while supporting the local authorities in Sviatohorsk – the town with the largest concentration of internally displaced people.”

One journalist questioned the UNHCR spokesperson on whether the Ukrainian President’s intention to sign an agreement with the European Union could trigger further flight and if reports were valid that people arriving in Russia were being killed for speaking Russian. 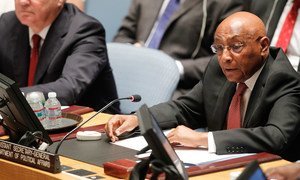