Following confirmation that President Juan Manuel Santos has been re-elected, United Nations Secretary-General Ban Ki-moon today said he looks forward to continuing to work with his Government in “efforts to promote peace, human rights and development” for all Colombians.

In a statement from his spokesperson, Mr. Ban said that Colombia is closer than ever to ending the hemisphere’s longest armed conflict through negotiations between officials and the Revolutionary Armed Forces of Colombia (FARC).

“This is an historic opportunity that should not be missed,” he said, reiterating the UN’s support, as requested, to the conclusion of the negotiations and implementation of the agreements reached.

In November, Bogota and the FARC released a joint statement announcing an agreement covering the latter’s participation in national politics. The agreement also called for the FARC to disarm and form a political movement.

According to Government estimates, some 600,000 people have died since the conflict between the country’s authorities and the FARC began in the 1960s.

The two sides are working to end the long-running conflict through full implementation of the General Agreement for the End of the Conflict and Building a Stable and Lasting Peace, signed two years ago.

Mr. Ban “encourages the parties to bring the peace talks to a successful conclusion as soon as possible, building on the important achievements to date,” according to the statement.

The UN chief also highlighted the importance of input and support from civil society in the peace efforts, and encouraged the parties to listen to those voices.

In addition to the FARC, Mr. Santos’s Government announced last week the start of peace talks with representatives of the National Liberation Army (ELN). Mr. Ban had welcomed the move. 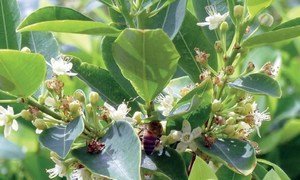