As ongoing violence in the Central African Republic (CAR) continues to drive civilians to seek safety elsewhere, the United Nations refugee agency is appealing to neighbouring countries to keep their borders open and allow access to safe haven for people on the run.

Overall, the crisis that began in CAR in December 2012 has thus far caused 226,000 people to flee to neighbouring countries, according to the UN High Commissioner for Refugees (UNHCR). There are also an estimated 550,000 people internally displaced, of whom 132,000 are in the capital, Bangui.

The agency said today it is looking into reports that people seeking safety in Chad may recently have been turned back at the Sido border entry point.

“Those being turned back are said to either be CAR nationals or Chadians who failed to prove their nationality to border guards,” he stated. “If the reports are correct, it would be of serious concern and run contrary to the principle under international law of non-refoulement (no forced returns).”

A large number of those fleeing for safety, both within the country and across its borders, are children, according to the UN Children’s Fund (UNICEF), which noted that there is no end to the horrors for young people caught up in the conflict.

The agency has verified that 277 children have been maimed and 74 killed over the past six months. The actual numbers are much higher, including deaths and sickness caused by the total collapse of basic services, it said in a news release.

“The violence in Central African Republic is gut-wrenching in its brutality and viciousness and children have not been spared,” said UNICEF Representative in CAR Souleymane Diabaté. “On average, at least one child has been maimed or killed in clashes every day in the past six months. The cycle of brutality and retaliation must stop.”

The agency is working closely with partners to protect children from violence, providing safe spaces for learning and psychological support for those most affected. Children separated from their families are being registered for reunification, and negotiations are ongoing with armed groups who have recruited children to secure their immediate release. 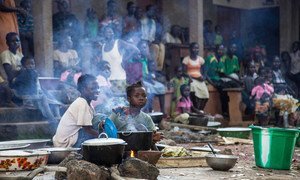