UNHCR/B. Heger
Displaced people shelter on the grounds of a church in Bossangoa. Until recently, religious institutions were considered safe havens for people fleeing conflict in the Central African Republic.
30 May 2014

In a statement to the press issued this evening, the Council “condemned in the strongest terms” the recent attacks in CAR, including those committed on 28 May on the Church of Notre Dame de Fatima in Bangui in which civilians, including displaced persons and a priest, were killed and others were injured and abducted.

Council members further strongly condemned the violence in Bangui earlier this week during which three Muslim youths were killed by suspected anti-Balaka elements on their way to an inter-communal reconciliation football match as well as the destruction yesterday of one of the last mosques in the strife-torn capital.

“The [Security Council] demands that all militias and armed groups and elements put aside their arms, cease all forms of violence and destabilizing activities immediately in order to end the cycle of violence and retaliation,” declared the statement.

It went to reiterate that the CAR Transitional Authorities have the primary responsibility to protect civilians, and to encourage them to take the necessary measures to prevent further violence in the capital and throughout the country.

“The members stressed the urgent and imperative need to end impunity in the CAR and the need for the Transitional Authorities to take immediate and concrete measures to ensure that the perpetrators of these acts are held accountable,” said the statement.

Calling for the acceleration of the political and national reconciliation process in order to lay the ground for an end to violence, the Council in its statement called on the Transitional Authorities to demonstrate their commitment to this process and to take concrete steps in this direction, with the support of the UN Multidimensional Integrated Stabilization Mission (MINUSCA), the Economic Community of Central African States (ECCAS) and the African Union.

Further, the Council underlined the importance of and reiterate its support for the role played by the African-led peacekeeping force, known as MISCA, French Forces and the European force known as EUFOR RCA, as well as MINUSCA to protect civilians as mandated by its resolutions 2127 (2013) and 2134 (2014) in support of the efforts of the CAR Transitional Authorities.

The members of the Council called on UN Member States and regional and international organizations to increase troop, financial, logistical and in-kind contributions to MISCA to enable it to implement fully its mandate and help prepare for the transfer of authority from MISCA to MINUSCA on 15 September 2014.

“They further request the Secretary General to take all necessary steps and to accelerate the preparations for a successful and swift transition of authority,” the statement added.

Earlier in the day, the UN Refugee Agency (UNHCR) also condemned the attack against innocent civilians sheltering at the church and said such violence endangers some of the last havens for those fleeing rampant violence in the war-battered country.

“Churches, monasteries and mosques have till now been safe havens for internally displaced persons across the CAR,” spokesperson Fatoumata Lejeune-Kaba told reporters at a briefing in Geneva.

At least 17 people were killed and 27 were missing after the attack on Notre Dame de Fatima, which, along with other attacks in the recent upsurge of violence in the country, was strongly condemned yesterday by UN Secretary-General Ban Ki-moon.

The attack is among the worst on any displaced persons site in Bangui since Séléka rebels were ousted from power in January 2014 and inter-community retaliatory violence spiralled, with human rights violations and clashes leaving 2.2 million in need of humanitarian aid.

At the time of the attack, Notre Dame de Fatima was hosting 9,000 internally displaced people (IDPs), including many who had been there since December and some 2,050 who moved there only a week earlier to escape from a recent rise in insecurity in nearby neighbourhoods, Ms. Lejeune-Kaba said.

She added that in Bangui, 32 out of 43 IDP sites are religious institutions.

“UNHCR strongly condemns this attack against innocent civilians. We call again on all sides of the armed conflict to protect civilians, in line with their obligations under international law,” she said.

“We also call on all sides of the conflict to allow for the delivery of critical humanitarian assistance and unhindered access to the people in need of protection and aid.”

Providing details on the church slaughter, she said that the attackers arrived in pick-up trucks in the early afternoon and threw grenades into the church grounds before opening fire with small arms.

The 17 killed during the attack include a priest, and 27 civilians were reportedly abducted by assailants who drove them to an unknown location. Two children and two adults also succumbed to their injuries on Thursday. 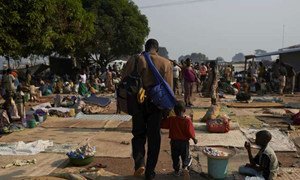 Secretary-General Ban Ki-moon today strongly condemned recent attacks in the Central African Republic (CAR) and encouraged the country’s Transitional Authority to do everything within its means to prevent further violence and to hold the perpetrators to account.