Taking the floor immediately after his election, Mr. Kutesa, who is Minister for Foreign Affairs of Uganda, said that today, “our world continues to be confronted with different challenges of global reach and impact,” including poverty and hunger; unemployment; myriad impacts of climate change; armed conflicts; and emerging security threats such as transnational organized crime, terrorism, piracy and human trafficking.

“Collectively, we must continue to take concerted action to address these challenges. This is what has made the United Nations a strong, unique and indispensable organization,” he said, proposing that theme of the 69th session would be: “Delivering on and Implementing a Transformative Post-2015 Development Agenda.”

That theme, Mr. Kutesa continued, builds on the important work and progress being made in the current session. It underscores the need to focus, not only on delivering or agreeing the post-Millennium Development Goal (MDG) agenda, but also, and most importantly, on ensuring its effective implementation.

“We shall have to address the means of implementation, in terms of financial resources, technology development, transfer and capacity-building. This will require a strengthened global partnership,” he said, adding that the ultimate objective should be to formulate a transformative agenda that supports global solutions, guides national development efforts, and empowers people to improve their livelihoods and determine their own future.

“I am motivated by putting people at the centre of everything we do. I am motivated by the need for socio-economic transformation,” he declared, looking forward to working with all Member States to develop an agenda that will eradicate poverty and hunger, create sustained and inclusive growth, employment and better livelihoods for all.

Mr. Ban went on to say that the position of Assembly President “demands a variety of skills” – bridge-building among all UN Member States; patience to guide the body through lengthy and complex negotiations; and “as a quiet guide, a messenger, a seeker of consensus.”

He said that a General Assembly President is guided above all by the values, principles and obligations of the UN Charter – which will celebrate its 70th anniversary during Mr. Kutesa’s term. “These many roles will also be especially important during the Assembly’s upcoming session, when many critical streams of work will converge and reach moments of truth,” he added.

Mr. Ban said that the Organization’s efforts to accelerate its work towards the MDGs will enter the home stretch, and discussions among Member States on the period beyond 2015 will move towards what is hoped will be an inspiring yet practical vision and a concise set of sustainable development goals.

“And on the grave overarching challenge of climate change, the climate summit on September 23rd and conference of parties in Lima in December will be key moments to mobilize solutions on the ground and ambition for a new global agreement next year,” he said.

Underscoring that the 69th session will take place amidst a period of “great consequence for the well-being and shared fate of people and the planet,” the Secretary-General urged cooperation to “keep ambition high and meet the expectations of the billions across the globe who look to the Assembly, this house of all nations, for dialogue, decisions and action to bring about the world we want and a life of dignity for all.”

In his remarks, current General Assembly President, John Ashe, said that his successor would be expected to guide the post-2015 development process – “a mammoth task” – throughout the 69th session, so that at the start of the 70th session, Member States are well-positioned to adopt a new global development framework that is ambitious, focused and leads to meaningful change.

“Over the next three months, my team and I will continue ‘setting the stage’ for the new agenda, including by convening a two-day high-level stocktaking event on September 8 and 9,” he said, explaining that the event would enable Member States and other stakeholders to share their views on inputs to the Secretary-General’s Synthesis report that will form the basis of the intergovernmental negotiations on the post-2015 development agenda.

Made up of all the 193 Member States of the United Nations, the General Assembly provides a forum for multilateral discussion of the full spectrum of international issues covered by the UN Charter. It meets in regular session intensively from September to December each year, and thereafter as required. 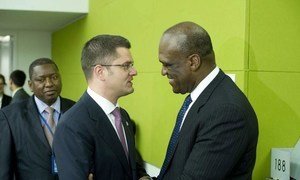