Ahead of World Cup, UN hails power of sport to bring communities, peoples together

Just days away from the kick-off of the 2014 FIFA World Cup in Brazil, Secretary-General Ban Ki-moon hailed the “best values of sport” – teamwork, fair play and mutual respect – as the United Nations today joined the international fervour that accompanies the games, even getting its normally staid diplomats out of suits and ties and into their national team uniforms.

“The first game is not until Thursday, but the level of excitement is already high. I suspect people are already adjusting their schedules in order to be in front of the television to see their teams perform,” Mr. Ban said at an event at Headquarters to mark the start of the World Cup, taking place in Rio de Janeiro, Brasilia, Salvador and elsewhere across Brazil, from 12 June to 13 July.

Along with the UN chief, today’s event featured General Assembly President John Ashe, as well as the Ambassadors of Brazil and the 31 other competing countries, and many local school children, many dressed in their national team uniforms.

Over the next month, hundreds of millions of people will be entertained and enthralled following the action at venues across Brazil, said the Secretary-General, adding that today’s gathering is an occasion to celebrate the best values of sport: teamwork, fair play and mutual respect.

“Sport has a unique ability to unite us, and to show us what we have in common. There is no better testimony than today’s event. What else can get ambassadors to shed their suits and ties and dress like this?!” Mr. Ban asked. 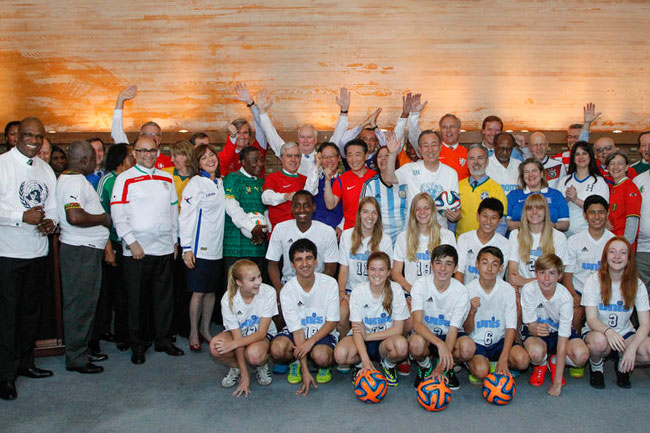 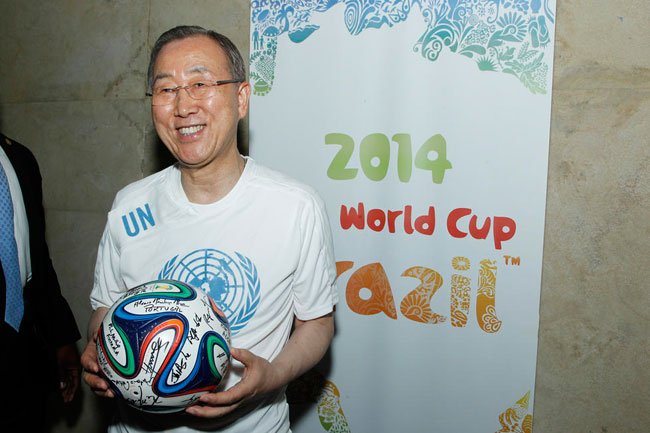 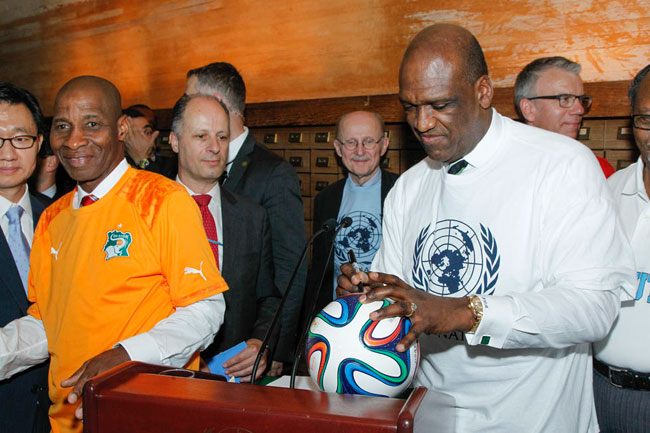 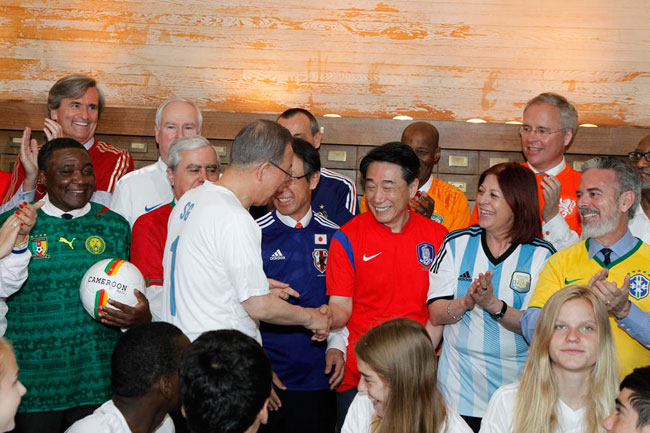 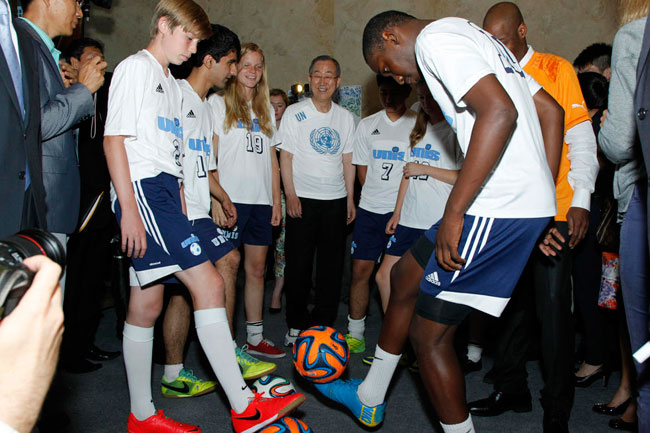 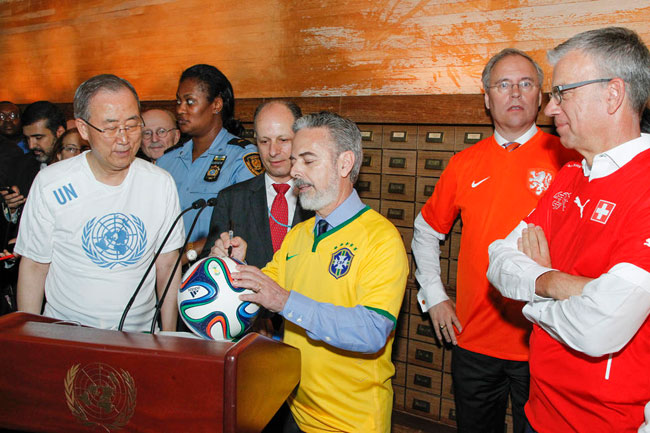 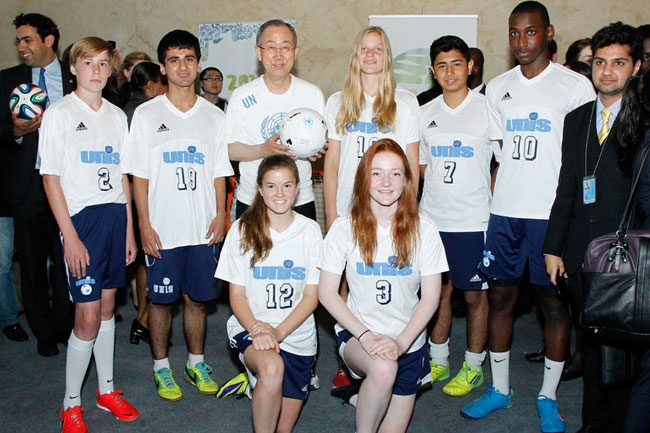 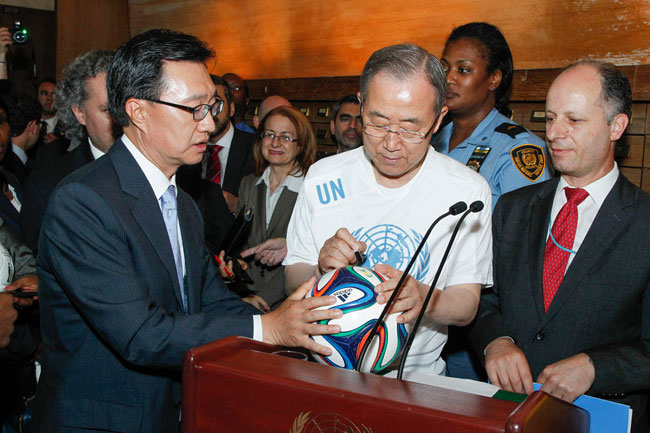 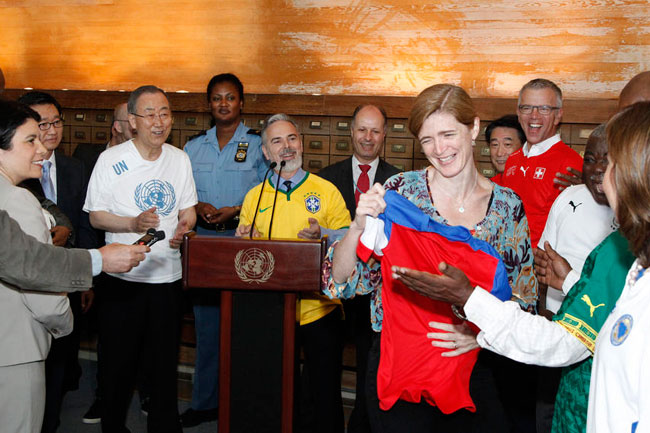 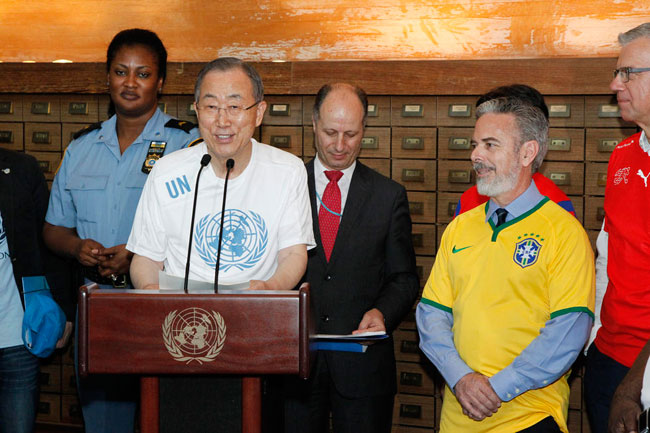 Secretary-General Ban Ki-moon met with young students from the New York area and representatives of the countries taking part in the 2014 FIFA World Cup, at a celebratory gathering to usher in the tournament. The games will be hosted by Brazil from 12 June through 13 July. UN Photo/Paulo Filgueiras

He wished all the competing teams in Brazil good luck, and recalled that last year he had had the honour of kicking off the ball at a Real Madrid match. “This year, they won the Champion’s League. I hope to bring all of your teams the same luck,” he declared.

UNAIDS Executive Director Michel Sidibé said the agency wants to harness the passion and solidarity of the World Cup to engage everyone involved in efforts to ensure that young people around the world protect themselves against HIV and have access to life-saving HIV services.

High-level officials, prominent athletes and youth teamed up at the United Nations in New York today to spotlight the values that the world of sports can advance, including, diversity, inclusion, peacebuilding and development.