With the planet’s oceans under stress, the United Nations is marking World Oceans Day by appealing to the international community to keep oceans healthy and productive and to use their resources peacefully, equitably and sustainably for the benefit of current and future generations. Source: screen capture UNESCO/Global Partnership for Oceans
8 June 2014

“We have to ensure that oceans continue to meet our needs without compromising those of future generations,” stressed Secretary-General Ban Ki-moon in a message marking the Day, adding “their depths hold current and future solutions to humanity's energy needs.”

Oceans regulate the planet's climate while providing a significant source of nutrition and essential passage for global trade. World Oceans Day is an opportunity to celebrate the importance of the oceans for life on earth and to stand up for their protection.

Oceans generate most of the oxygen we breathe, absorb a large share of carbon dioxide emissions, and are important economically for countries that rely on tourism, fishing and other marine resources for income, and serve as the backbone of international trade.

In her message, Irina Bokova, Director-General of the UN Organization for Education, Science and Culture (UNESCO), emphasized that “at a time of rising threats, 'business as usual' is no longer acceptable – we must change how we understand, manage and use ocean resources and coastal areas. For this, we need to know more about the ocean and draw on stronger science to craft sustainable, ecosystem-based policies for the ocean and coasts.”

The UN General Assembly has recognized oceans and seas as an important part of sustainable development – as envisioned by the Millennium Declaration and it landmark anti-poverty Goals (MDGs). Looking now to craft a successor post-2015 sustainable development agenda, Member States have identified protecting oceans as one of the keys to creating a better, cleaner future for the planet.

“Billions of humans, plants and animals depend on our oceans each and every day,” said General Assembly President John W. Ashe in his message. “I call on Member States and other stakeholders to continue to take action to protect our oceans by reducing pollution, and protecting marine life for present and future generations.” he added.

Since 2009, the UN family has come together each year, urging communities to ensure that our oceans remain clean and healthy. This year's theme “Together we have the power to protect the ocean!” underscores the power of collaboration.

This year, the observance coincides with the 20th anniversary of the entry-into-force of the landmark UN Convention on the Law of the Sea – known as “Constitution for the Oceans” – that provides a comprehensive legal regime for all ocean activities. It is also the International Year of Small Island Developing States.

The ocean is essential to our well-being and the future of our planet. World Oceans Day is an occasion for all Governments and societies to join forces in ensuring its protection.

“One planet, one ocean – together, we have the power to protect them both,” exhorted Ms. Bokova.

♦ Receive daily updates directly in your inbox - Subscribe here to a topic.
♦ Download the UN News app for your iOS or Android devices.
Islands

Annan calls for peaceful resolution of disturbances in Solomon Islands 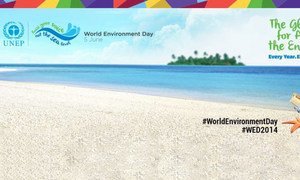 'Raise your voice, not the sea level,' urges UN on World Environment Day