Secretary-General Ban Ki-moon today condemned a deadly mortar attack on an electoral rally in southern Syria and reiterated his call for an end to violence in the country.

In a statement from his spokesperson, Mr. Ban again stressed his opposition to the indiscriminate use of violence in the Syrian conflict.

“Indiscriminate use of any weapons by any party against civilians in contravention of obligations under international humanitarian and human rights law,” he said in the statement.

According to media reports, mortar fire has hit an election rally in support of President Bashar al-Assad, killing at least 21 people. Mr. Assad, who reportedly was not at the event, is campaigning for a third seven-year term as President.

The Syrian crisis is entering its fourth year with more than 9.3 million people affected, to UN figures.

In today’s statement, Mr. Ban said he “deeply regrets the inability of the international community to unite in stopping this conflict” and “in finding ways to hold accountable perpetrators of atrocities” such as today’s attack.

Yesterday, the Security Council failed to adopt a resolution that would have referred the situation in the war-torn nation to the International Criminal Court (ICC), due to vetoes by permanent Council members Russia and China.

The resolution, which was backed by the other 13 members of the Council, would have given the ICC the mandate to investigate horrific crimes committed during the course of the conflict in Syria, which since March 2011 has killed more than 150,000 civilians, the displaced millions and led to widespread violations of human rights.

Mr. Ban, who has been in China for a week-long official visit, stressed that the Syrian people need a clean break from the past to move towards a new Syria, “one in which their legitimate aspirations are met and all communities are protected.” 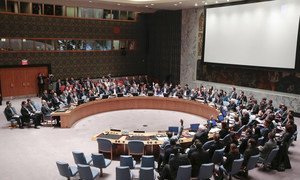