This August, Major General Kristin Lund will become the first female commander of a United Nations peacekeeping force, taking the military helm in Cyprus where the top UN official, Lisa Buttenheim, is also a woman.

“I think it’s very important that the UN took this step to appoint a female force commander and I hope that I can be a role model for other female officers that see that it’s possible,” Major General Lund told the UN News Centre.

“When you approach a challenge in a country, such as Cyprus, it’s important also that you represent – because there are so many men force commanders – the other 50 per cent of the population in the world.”

Speaking at the world body’s New York Headquarters after the official announcement that Ms. Lund would take over military command of the UN Peacekeeping Force in Cyprus (UNFICYP), Secretary-General Ban said that over the six and a half decades of UN peacekeeping operations, all Force Commanders have been males.

“Today we shatter another glass ceiling,” he said, adding a reference to his Special Representative (SRSG), Ms. Buttenheim: “Our operation in Cyprus today becomes the first in the world to have a dual female leadership.”

Major General Lund, of Norway, who turns 56 this week, has had a distinguished military career, according to Mr. Ban’s spokesperson, with over 34 years of military command and staff experience at national and international levels.

“The first time you are out is often, in a way, what sits for a long time in your mind,” the Major General said about her deployment to Lebanon with the UN Interim Force in Lebanon (UNIFIL) in 1986 as a transport officer.

“I was on a vehicle where we had 50 calibre, we had a machine gun and I was sitting behind the machine gun,” she said describing an escort mission to pick up new soldiers. After shooting broke out, the vehicle took an alternative route and ended up in an area where it was not supposed to be.

“The way to handle it was actually through communication, through building trust at the check points. And I think that was the first time I realized why it is so important for the UN to always use minimal force and as a last resort,” she continued.

Her deployment in the Balkans, where between 1992 and 1993 she served with the UN Protection Force (UNPROFOR) in Bosnia and later with the NATO-led force, was what “formed me as a leader because you have to play like an orchestra” [to cope] with the various military components and the people involved in the conflict.

“You learn how important the mandate is,” she said, referring to the responsibilities tasked to the Mission by the 15-member UN Security Council. “You see the importance of not taking sides.”

Bosnia was also the first deployment where the Major General experienced real violence.

“It’s not normal that you see people get killed. You get used to seeing scenes that you, as a military, in a way, prepare for, but you don’t actually hope to get involved. But there you saw the whole spectra,” she recalled.

Major General Lund also served in the Middle East during the first Gulf War in 1991 and in Afghanistan with the International Security Assistance Force (ISAF) from 2003 to 2004.

In Cyprus, Major General Lund will command a force which over the years has rotated through more than 150,000 troops. The Security Council established UNFICYP, which marked its 50th anniversary in March, to contribute to a return to normal conditions following violence and bloodshed between the Greek Cypriots and Turkish Cypriots communities.

UN troops supervise the de facto cease fire lines established in 1974, and maintain control over the buffer zone dividing the island. Despite the general calm, UNFICYP records on average about 1,000 incidents in the buffer zone every year.

“It’s hard to believe there is a place where you can go and have a beautiful day vacation, [but] has mine fields that are not cleared yet,” said the Major General. “I have to analyze the mandate and see what type of activities that I as the Force Commander can do in support of the Mission and the SRSG [Buttenheim].”

Ms. Lund rejoins the Organization as the UN Department of Peacekeeping is spearheading a modernization campaign in its missions “to do more with less”, at the request of the Secretary-General and the resource-contributing Member States.

“Communication is vital,” said Maj Gen Lund, who led the 56,000-strong Norwegian Home Guard during its modernization. “When you are changing a huge organization, everyone needs to know the end stage, where are we going, because if you are [making] changes and you don’t have all the layers with you, it will take a very long time.”

She heads to Cyprus this summer where she will take over on 13 August from Chinese national, Major General Chao Liu, and join SRSG Buttenheim.

“Our Minister of Defence [Ine Eriksen Søreide] is a woman,” Ms. Lund said when asked if she has ever had a female boss. “But before that, no, never because I have always been the first female in all positions.”

She was appointed Norway’s first female General in 2009, having taken deputy command of the country’s armed forces in 2007. Her most recent position was head of Veteran Affairs on the Norwegian Defence Staff.

“Gender is important,” she said, adding light-heartedly, “Men have also a lot of good qualities that I’ve taken advantage of.”

“I think the most important thing is to be yourself,” advised the Major General. “Be yourself, be honest, be straight, be clear. I’m not the person standing with a hat in the hand, I speak up.”

A motorcycle aficionado, Ms. Lund has decided against taking her beloved Harley to Cyprus.

“I’m quite into Harley-Davidson, that’s my favourite, but I don’t think I will take a bike. I will see if I can borrow or buy a bike there because [mine is] a collector’s item.” 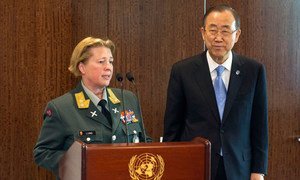 Major General Kristin Lund, of Norway, has become the first woman ever to serve as Force Commander in a United Nations peacekeeping operation, it was announced today.