WFP/Rein Skullerud
The conflict in the Central African Republic has destroyed countless livelihoods and disrupted food production.
2 May 2014

As the unprecedented crisis in the Central African Republic (CAR) continues to deepen, the United Nations World Food Programme (WFP) has accelerated its operations – distributing 60 per cent more food in April than in March.

As the unprecedented crisis in the Central African Republic (CAR) continues to deepen, the United Nations World Food Programme (WFP) has accelerated its operations – distributing 60 per cent more food in April than in March.

“This is the highest figure so far this year,” WFP spokesperson Elisabeth Byrs told reporters in Geneva today

She said that as of 29 April, almost 200,000 people had received food assistance – including 24,700 children who were given special nutrients. A targeted supplementary feeding supported 3,000 malnourished children aged six months to five years and 2,500 children hospitalized in paediatric units.

“WFP is expanding its operations geographically inside the Central African Republic,” Ms. Byrs continued. In December, WFP reached four urban centres with food assistance, by March it expanded to 21 locations and in April to 35.

The UN agency is also increasing its assistance both in and outside of the capital, Bangui – currently delivering aid up to 2,000 kilometres away from the capital.

“WFP recently deployed mobile storage units in two locations in the extreme north of CAR to increase the warehousing capacity and to support the seed protection campaign by the Food and Agriculture Organization,” elaborated Ms. Byrs.

The agency’s food shipments to the Cameroonian port of Douala are first transported by road to a warehouse in Bangui and then to one in another city – for pre-positioning. From these two basic warehouses, WFP distributes food to other small and mobile warehouses throughout the rest of the country.

“It takes 16 days for trucks to transport food to Bangui and 11 days to the other city,” underscored Ms. Byrs showing the difficulties and the importance of air transportation. WFP is trying to resolve the problem of procuring fuel for transporting food by plane.

When asked how many Central Africans were in need of food, Ms. Byrs responded, “1.6 million people are directly affected by the current situation and need food assistance.”

This was double the number of people needing food assistance one year ago. There are also 700,000 internally displaced persons.

The UN agency also provides food assistance to internally displaced persons in the Democratic Republic of the Congo.

WFP needs $17 million for humanitarian assistance for the refugees in the camps, including food assistance and the food for work programme. In the Republic of Congo, the UN agency has a three-month-programme, for which it has requested $2.7 million in the next month. 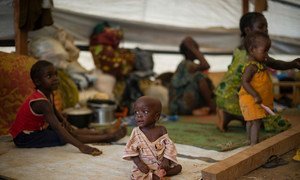