OCHA/Phil Moore
One year old Exouce, who is suffering from malnutrition, sits in a tent where he and his family are taking shelter at the Don Bosco centre in Bangui.
1 May 2014

Just back from Boda, a town located in the southern part CAR, John Ging, Operations Director of the UN Office for the Coordination of Humanitarian Affairs (OCHA), said that while the situation in the country is “deteriorating at an alarming rate,” he was also struck by a profoundly worrying shift in the attitudes of the people since his last visit three months ago.

“When I was here before, the people were then identifying armed groups [either anti-balaka or Séléka rebels] as the problem. Now, the common refrain is that 'communities' are at fault: Christians and Muslims blaming [each other]. This is now the ugly face of the conflict,” he told reporters at a UN Headquarters press briefing.

Fighting in CAR has taken on an increasingly sectarian nature following a 2012 rebel-led coup and has since become more brutal with reports of ongoing human rights violations and reprisal clashes between largely Christian anti-balaka and mostly Muslim Séléka rebels that have displaced hundreds of thousands of people both inside and outside the country, and left 2.2 million in need of humanitarian aid.

“This ethnic and religious dimension has resulted in the segmentation and segregation of communities. Ordinary people are being radicalized…manipulated [and] made to believe that segregation is the solution to the crisis,” said Mr. Ging, emphasizing the abject fear in which the various communities are now living.

Providing a stark example of this, he said that in Boda, the 24,000 Muslims – a minority in the town –feel they are under threat and that evacuation is the only way to be safe. Moreover, Christian leaders in the area were also urging that Muslim villagers be evacuated, compounding their fears and stoking intolerance. “People are asking to be moved from their own communities.”

“Attempts at inter-communal dialogue have failed. Needless to say, evacuation and separation are not the solution,” said Mr. Ging, adding however, that “as humanitarians, we have to [carry out] these evacuations.”

“The basis for fear is real and the challenge on the security side is, at present, bigger than our capacity to deal with it, leaving the people with an impossible choice,” he said, whether to stay in their communities and possibly be killed, or to flee their homes with nothing.

Strife-riven Bossangoa, where “all Muslims are gone now”, some 2,000 having fled on their own and the rest, evacuated with the help of the UN, is a case in point. “This is a measure of our failure as an international community. It is a stop-gap; a solution that is not really a solution because these people will, at some point, have to return home,” said Mr. Ging.

And while deeply impressed by the “outstanding leadership” in the Central African Republic in the face of such an overwhelming and multifaceted crisis, he said that at present, the Government's capacity “is severely limited.”

As such, it is now up to the international community to help prevent despair and hopelessness from further permeating communities around the country. The world must uphold its responsibility. “If it does so, the situation can be turned around,” Mr. Ging said, recalling CAR's long history of inter-communal tolerance and cooperation.

For example, he said that traditionally, the Muslim community was largely involved in CAR's trade and industry sectors and the fact that they cannot conduct their business freely is compounding the problems for all communities in the country.

“First and foremost, what we have to do is counter the fear that is gripping the population; they are consumed by fear and hopelessness and they see armed groups conducting attacks with impunity on both sides,” said Mr. Ging.

He said the abiding sense of hopelessness is being fomented by armed groups, and ordinary people on all sides were becoming convinced that the ideology of ethnic cleansing “which we have seen play out tragically” in other countries, is inevitable in the CAR…“and this is very worrying as it is a foundation for further atrocities.”

“This is where the international community comes in,” and, while expressing support for the African-led International Support Mission to the Central African Republic (MISCA) and French support troops known as Sangaris, he said that hose forces have limited resources and limited numbers and cannot provide country-wide protection.

“The only way people can even begin to contemplate rebuilding their lives is if there is real security,” he said, adding that while people were very hopeful about the deployment of the newly-mandated UN peacekeeping mission in CAR: “They need security now”

Beyond the security dimension, he urged a focus on the lack of funding. He recalled that a pledging conference in February generated some $200 million in pledges, but four months later, only $123 million had been provided. And this was only part of a total $500 million appeal. With the total appeal only 28 per cent funded, CAR was left short of medicine and food and other necessary humanitarian supplies, a dire situation made worse because the rainy season is beginning in earnest.

“We can't say that it's a forgotten crisis or that we don't know what is needed,” he said. “The response has not been mobilized on the scale or in the timeframe needed to solve the problem.”

Mr. Ging reiterated that “it is not enough to have a discussion about what's right or what's wrong in principle; it's what are we going to do in practice. So it is our duty to protect these people.”

A photo journey - Taking refuge at the airport in Bangui 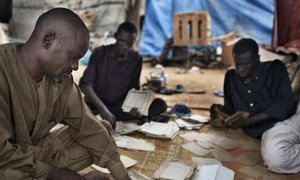 At least two people were killed and six others injured in the Central African Republic (CAR) after an attack on an 18-truck humanitarian convoy relocating 1,300 Muslims to safety in the country’s north, a spokesperson for the United Nations refugee agency today confirmed, renewing calls for protection of displaced people.