17 April 2014
The United Nations today voiced concern over the arrest and detention of over 1,000 refugees and asylum-seekers who were rounded up during counter-terrorism operations launched by Kenyan security forces in Nairobi this month.

The United Nations today voiced concern over the arrest and detention of over 1,000 refugees and asylum-seekers who were rounded up during counter-terrorism operations launched by Kenyan security forces in Nairobi this month.

Most of those who have been arrested in the operations targeting undocumented foreigners are Somalis, 82 of whom were deported to Mogadishu on 9 April, according to the UN High Commissioner for Refugees (UNHCR).

While the agency was able to secure the exemption of 10 registered refugees from this deportation, at least one refugee is reported to have been among those deported.

“UNHCR fully recognizes the national security imperatives Kenya faces in the wake of recent devastating terrorist attacks,” the agency stated, while adding that the vast majority of Somali refugees and asylum-seekers in Kenya are and have been law-abiding members of their communities.

“Furthermore, given ongoing hostilities in their country, Somalis, especially those originating from southern and central Somalia, continue to be in need of international protection as refugees and should not be returned against their will to a place where their lives will be exposed to risk.”

While UNHCR has received access to Kasarani stadium and police cells where those arrested have been held and was able to secure the release of a number holding refugee documentation, it is “disturbed” by reports of harassment and other abuses. Furthermore, the conditions at Kasarani stadium and in the police stations are overcrowded and sanitary conditions are inadequate.

“UNHCR welcomes the assurances it has received from the Government that no registered refugee or asylum-seeker will be deliberately deported, but remains concerned that others could also face threats if returned,” stated the agency.

In addition, if the directive issued on 25 March 2014 ordering all urban refugees to move to the Dadaab and Kakuma refugee camps in the north of the country is implemented, it will disrupt the lives of refugees who have for years settled and built their lives peacefully in Nairobi, Mombassa and other urban areas.

UNHCR said it remains ready to work with the Government to preserve the favourable asylum and protection environment which Kenya has provided over the years while ensuring that the country’s legitimate security concerns are catered for. 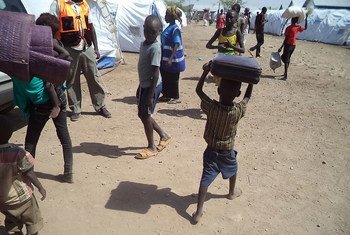 28 March 2014
The United Nations refugee agency today denounced as “scapegoating” the Kenyan Government’s decision earlier this week to order some 50,000 refugees, believed to be mostly Somalis, to report to two camps after a recent upsurge in violence in the region.