The ongoing unrest in eastern Ukraine, if not addressed as a matter of priority, risks seriously destabilizing the rest of the country, a senior United Nations human rights official warned the Security Council today, as he also urged steps to counter misinformation and bring to an end all incitement to hatred, discrimination and violence.

“At the outset, I wish to emphasize the strong inter-linkages between chronic human rights violations in Ukraine, the Maidan protests and the current situation in the east,” said Assistant Secretary-General for Human Rights, Ivan Šimonović, as he briefed the Council on his two missions to the crisis-torn country in March. His first report on the human rights situation there was issued yesterday.

Months of political unrest in Ukraine led to the removal by Parliament of President Viktor Yanukovych in February, followed by increased tensions in the country's autonomous region of Crimea, where additional Russian military were subsequently deployed and a secession referendum was held in mid-March, in which the majority of the region's people voted to join Russia.

This past weekend, tensions flared in eastern Ukraine as Lugansk, Kharkiv and Donetsk and at least 5 other cities in the region were targeted by uprisings and the seizure of Government buildings. Media reports suggested large numbers of Russian troops deployed along the border with Ukraine, and, in the city of Slovyansk, where the police station was seized, protesters reportedly demanded a referendum similar to the poll held in Crimea.

Mr. Šimonović told the Council today that almost a third of the population in Ukraine lives under the poverty line and “huge disparities” in standards of living and inadequate access to social services attributing to corruption and mismanagement were among the underlying factors that led to the Maidan protests.

“Protests that started in Kyiv and swept across the rest of the country from November 2013 to February 2014 revealed a deep-rooted sense of dissatisfaction in the people of Ukraine,” he said, explaining that violence by the security forces against pro-European protesters in Kyiv on 30 November 2013, created outrage and led to the radicalization of the demonstrations, as well as to clashes between the protesters and police.

“Legislation that curtailed freedoms of expression and assembly enhanced a sense of impunity by police was rushed through the Rada (parliament) in mid-January and led to violent actions by some protesters as well,” said Mr. Šimonović, adding that progress is still being made on bringing the perpetrators of human rights violations to justice. Some 121 persons had been killed and 100 people still remain unaccounted for.

He went on to say that during the protests, expressions of national, racial or religious hatred by some groups or individuals were expressed. Yet, attacks on the ethnic Russian community were isolated incidents which were then exaggerated through what he called “biased media reporting”, fuelling fear and insecurity among the Russian ethnic community.

“Fear and insecurity breed when incitement to hatred, discrimination or violence is not curtailed,” Mr. Šimonović continued, telling the Council that it is therefore critical that the issue be addressed as a matter of priority, and he welcomed steps already under way by the Government and the Prosecutor’s Office to publicly condemn and investigate any such instances.

Turning to his 21 to 22 March visit to Crimea, the most recent by a senior UN official, he said he had interacted with a wide range of interlocutors, including civil society, local authorities and victims themselves, allowing him to get a first-hand impression of the situation.

“Media manipulation significantly contributed to a climate of fear and insecurity in the period preceding the referendum,” he said, and the presence of paramilitary and so-called self-defence groups, as well as soldiers in uniform but without insignia, was not conducive to an environment in which voters could freely exercise their right to hold opinions and the right to freedom of expression.

He also expressed concern that on 11 April, authorities in Crimea rushed the adoption of a new constitution. The Crimean Tartar Mejlis raised important human rights concerns about the total lack of public debate, as well as the exclusion of Crimean Tartars from the drafting process, said Mr. Šimonović, adding that concerns had also been raised regarding citizenship issues, specifically, that those not accepting Russian citizenship would reportedly face many obstacles in guaranteeing their property and land rights, access to healthcare and enjoyment of other civil and political rights.

As for the situation in the country’s eastern region, he said that an already tense situation has “deteriorated significantly.” Reportedly, armed pro-Russian activists have established a “People’s Republic of Donetsk”, taking control of a number of Government buildings. In Luhansk, pro-Russian protestors continue to occupy local security services buildings, and further, in Kharkiv, participants of a pro-Ukrainian rally were attacked and beaten by pro-Russian demonstrators who broke through a police cordon, resulting in some 50 persons being injured.

“The situation in the east, if not adequately addressed as a matter or priority, risks seriously destabilizing the country as a whole,” he warned, underscoring that those with “influence over the situation” should take immediate action to halt the violence. “The arming of protesters and their transformation into quasi-paramilitary forces must be stopped. Anyone inciting violence and providing arms to protesters can be held accountable for the resulting tragic consequences.”

To de-escalate the situation, Mr. Šimonović said all parties need to be encouraged to start an inclusive, sustained and meaningful national dialogue based on the respect of legal obligations of Ukraine under international human rights treaties it has ratified.

“Such a process should take into consideration the concerns of all those who live in Ukraine, including minorities, and address such issues and language rights, and decentralization of the country,” he said.

Finally, he stressed the importance that accurate human rights reporting could play in preventing violence and defusing tensions. Following yesterday’s release of his first report, his Office intends to issue its second report on 15 May. “Anyone with any relevant information should share it with us so that we can verify it, further investigate if necessary and include it in our next report,” he concluded. 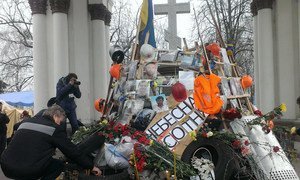 While corruption and widespread inequality were among the root causes of the massive street protests that erupted last year in Ukraine, the fear-mongering and incitement to hatred that have followed must be urgently countered to avoid further escalation of tensions in the country, states a United Nations human rights report issued today.