Secretary-General Ban Ki-moon attended today the Climate Leaders’ Summit in Washington, D.C., recalling the importance of keeping global warming as a top concern in the development agenda, and urging Governments to reach a universal legal climate deal by the end of the year.

“Climate change is the defining issue of our times. It has sweeping implications for the entire security and development agenda,” said the United Nations chief to a group of world leaders, including the President of the World Bank Group, Jim Yong Kim.

He urged global leaders to reach an ambitious and achievable agreement to limit global temperature rise within 2 degrees Celsius above pre-industrial levels, which is “what the international community has agreed is the upper limit of safety,” and beyond which “the consequences will be unpredictable, highly dangerous and perhaps irreversible.”

“Climate impacts are already affecting agriculture and food security, human health, water supplies, and ecosystems on land and sea,” warned Mr. Ban, adding that “the world is not prepared yet.”

The UN chief is convening this upcoming 23 September a Climate Change Summit, with leaders from Governments, businesses and civil society, to “raise the level of ambition, catalyse action on the ground and increase political momentum.”

While global warming is a threat, said the Secretary-General, it presents also “a golden opportunity to promote prosperity, security and a brighter future for all.”

The UN chief called on all leaders to make the necessary political investments for a sustainable future. “We need to address market distortions, such as fossil fuel subsidies, that promote more energy use and greater emissions and inhibit the adoption of cleaner technologies,” he stressed, adding that we need to be clear about the risks of investing in fossil fuels.”

“None of these areas are politically easy,” he noted. “Addressing them will demand vision and leadership -- in the climate negotiations and at home.”

In addition to political investments, Mr. Ban also called for financial investments in climate action. “Financing is the key to achieving a universal legal climate agreement in 2015. We have to provide $100 billion by 2020 and thereafter $100 billion. We have developed a Green Climate Fund but that is not yet capitalized,” he said.

“I am counting on you to provide funds for it,” he told the world leaders, stressing that developing countries, in particular, are in need of investments as they build their own low-carbon futures.

The Secretary-General explained that “public policy must pave the way -- with a financial framework that is conducive for private money to flow at scale into the green space,” noting that “all business leaders say they are ready to finance a green economy but they need clear direction and predictable policies from governments.”

In his address, the UN chief hailed the “great advances on health” achieved by countries all over the world through the Millennium Development Goals (MDGs). “Millions of women and children have been spared preventable deaths. The spread of HIV/AIDS has been slowed and malaria is being contained. And there is progress against tuberculosis and other infectious diseases.”

He encouraged world leaders to pursue their efforts further, particularly in reaching the most vulnerable people, stressing that the Lancet Commission on Investing in Health reveals that there is an opportunity to close the gap by 2035.

“I have seen that success is possible. In rural parts of Africa, Asia and beyond, I have visited small health posts that deliver big results. I have witnessed immense relief on the faces of pregnant women when they find a skilled attendant to help them during delivery. I have spoken to adolescents and young adults who need sexual and reproductive health services. And I have underscored the importance of helping members of the older generations who may require special care.”

The Secretary-General then went on to name some of the biggest challenges the world faces in terms of public health as the pos-2015 development agenda is being shaped: “reducing exposure to pollution, improving nutrition, and promoting overall well-being.”

Highlighting the importance of the concept of universal health coverage, Mr. Ban deplored that “right now, an estimated 100 million people fall into poverty because health costs break their family budget. “Universal coverage would protect them and build resilience across society,” he continued.

“Universal health care can be the model for the 21st century. It provides access to services, prevents against exclusion and protects people from financial risk. This will bring more than health – it will bring equity, and contribute to a life of dignity for all.” 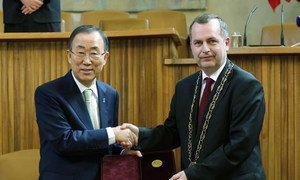 In Prague address, Ban highlights ‘crossroads moment’ in shaping better future for all

From reducing poverty and hunger to addressing climate change, the world faces big challenges that cannot be tackled alone, Secretary-General Ban Ki-moon said today, highlighting the importance of shared global responsibility in an address to students in the Czech Republic.