8 April 2014
While noting that the United Nations World Food Programme (WFP) provided assistance to a record 4 million Syrians in March, a new report out today highlights that, with only one month left in the rainy season, a potential drought may strain the country’s already fragile food security situation.

“It has taken a massive effort from WFP and partners to scale up to reach 4 million people in March, but we fear now that a possible drought – if rainfall doesn’t pick up – could put the lives of millions more at risk,” said WFP’s coordinator for the Syrian crisis Muhannad Hadi.

The agency’s Special Focus Syria report reveals that since September, rainfall has been less than half the long-term average – greatly impacting the next cereal harvest. With only one month left in the rainy season, which lasts until mid-May, it is unlikely that there will be a significant agricultural recovery in the war-torn country.

Mr. Hadi adds: “Syria suffered from five years of drought right before the conflict broke out and vulnerable communities in affected areas hardly had time to recover before they were hit by the conflict.”

The report says that dry conditions – also affecting the wider Middle East – will compound the impact of the civil war on the agricultural sector. “The situation will not change while conflict lasts and its resolution will take considerable time if and when peace is restored to Syria,” the report says.

Wheat production is expected to be a record low – between 1.7 to 2 million metric tons – further increasing import requirements to meet Syria’s wheat needs that last year stood at 5.1 million tons.

“As conflict affects the most productive agricultural sector, low agricultural production levels will become a permanent feature,” adds the report.

Livestock and pastoral livelihoods will also suffer as a result of water shortages and poor pasture availability.

According to current rainfall data, the worst-affected governorates account for close to 50 per cent of Syrian wheat production.

The northwest of the country – particularly the Aleppo, Idleb and Hama governorates – are the most affected, with poor conditions extending also to Raqqa, southern Hassakeh and areas of Deir Ezzor.

Most of these governorates show pessimistic crop development, with the worst-affected exhibiting signs similar to those of 2008, which was a major drought year in Syria.

Additionally, WFP says that the increasing dependency on cereal imports will further bump up food prices in the country.

WFP works with 28 different partners in all 14 governorates in Syria.

Mainly as a result of locally negotiated ceasefires, WFP has recently succeeded in reaching all 14 Syrian governorates for the first time in six months – although many areas within governorates remain inaccessible as the conflict continues.

In addition, WFP provides food and vouchers on a monthly basis for 1.5 million Syrian refugees in neighbouring countries.

Funded entirely by voluntary contributions, WFP needs to raise approximately $40 million a week to finance what is its biggest and most complex operation. 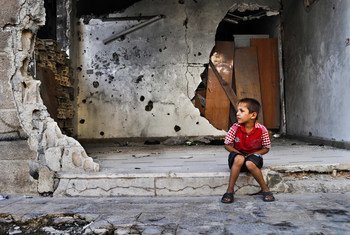 8 April 2014
Amid surging violence across Syria, United Nations Secretary-General Ban Ki-moon has condemned the killing of an elderly priest in Homs and the ongoing brutality against the civilian population, and urged all Syrians and their outside supporters to put a stop to this conflict, “now.”